Making something new is like climbing a mountain without a map. Only at the end of the journey does the route come clearly into view.

On the new Netflix series “Song Exploder,” based on the podcast of the same name created by Hrishikesh Hirway, the blind expeditions of popular music artists, including R.E.M., Alicia Keys and Ty Dolla Sign, are recognized as their own form of entertainment. Using a mix of interviews and behind-the-scenes footage, the series spotlights the chaotic trail of stumbles, breakthroughs and revelations that led to the creation of a single song.

Hirway uses a mix of interviews and behind-the-scenes footage to track the creative process of artists including Alicia Keys (Photo: Twitter)

Hirway uses a mix of interviews and behind-the-scenes footage to track the creative process of artists including Alicia Keys (Photo: Twitter)

Hirway, a podcast impresario and the host and an executive producer of the “Song Exploder” television series, is a devoted connoisseur of the creative process. He is an artist himself — he makes music with the bands The One AM Radio and Moors, and composes scores for film and television — but is best known for his growing portfolio of podcasts, all of which circle the basic question of what it takes to make something meaningful.

In addition to “Song Exploder,” Hirway created and hosts or co-hosts “The West Wing Weekly” (co-hosted by a friend and actor from the series, Joshua Malina); “Partners”; and, most recently, “Home Cooking,” with chef and bestselling author Samin Nosrat, also a friend. The Netflix show, which premiered in September and will return next month with a second batch of episodes featuring Dua Lipa, Nine Inch Nails, The Killers and Natalia Lafourcade, has afforded him a bigger canvas and a powerful patron that few other independent podcasters have been able to reach. But the more successful Hirway has become at chronicling other artists’ journeys, the more he finds himself haunted by the gaps in his own. 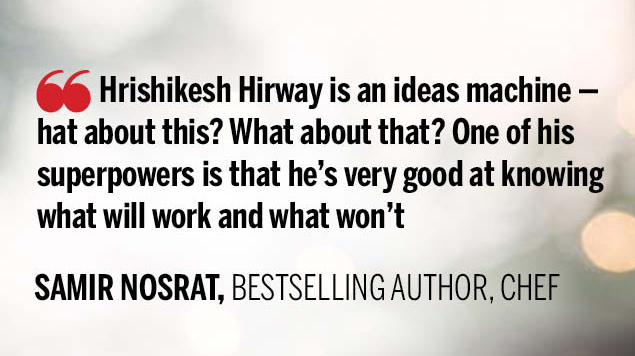 Hirway, 41, is tall, with a swoop of black hair, a Zen disposition and one of those improbably smooth radio voices that could double as a treatment for hypertension. “I have this daydream that when I’m older I’ll just make music and narrate audiobooks,” he said during a series of interviews in October.

For the time being, he was busy with his actual jobs, which included recording and editing biweekly episodes of the “Song Exploder” and “Home Cooking” podcasts, preparing to record a special edition of “The West Wing Weekly” with its creator, Aaron Sorkin, mixing the soundtrack for a video game score he had written and adding the finishing touches to the latest episodes of the Netflix series.

When we first spoke, he was at the spartan-chic home in Los Angeles that he shares with his wife, a fashion designer. He took our video call in his garage recording studio, surrounded by a piano and guitars, where he spends 10 to 11 hours every day. If anything, quarantine had only increased his productivity. “Home Cooking,” another of Hirway’s daydreams, on which he and Nosrat respond to listeners’ cooking conundrums, began in March as a response to the first wave of the coronavirus pandemic.

“He’s an ideas machine — ‘What about this? What about that?’” Nosrat said. “One of his superpowers is that he’s very good at knowing what will work and what won’t.”

The son of Indian immigrants who settled in Peabody, Massachusetts, Hirway didn’t intend to become a media maven. His father was a food scientist, and his mother worked for Sears. Hirway fell in love with music as a child — first playing piano, then, in high school bands, drums and guitar — and, to his parents’ distress, studied art at Yale. After graduating in 2000, he worked as a graphic designer while attempting to turn his college band, The One AM Radio, into a full-time gig.

For a while, he succeeded. The band — a blog-era indie rock project whose songs, including “Accidents” and “An Old Photo of Your New Lover,” were featured in the romantic comedy “Save the Date” and on the CW dramas “One Tree Hill” and “Gossip Girl” — toured internationally and released four albums between 2002 and 2011. But, by 2012, after a disappointing commercial response to the last The One AM Radio album, Hirway felt mounting pressure to pivot to a more sustainable career.

“I had been trying to satisfy this rebellious streak and make my own way in the world,” he said. “But there’s another side of me that feels this responsibility to live up to the potential my parents had imagined that I had, and that they had come to this country and worked so hard to create.” Hirway decided to become a film composer, thinking that it would allow him to continue making music and maintain a more stable lifestyle. But steady work in the insular movie industry eluded him.

In 2013, he came up with another plan. While touring for The One AM Radio, he’d become a regular listener to three podcasts, the movie trivia show “Doug Loves Movies,” the history-oriented “The Memory Palace” and “WTF with Marc Maron.” Maron’s show, on which the host and fellow comedians shared war stories from the comedy world with spellbinding, intramural candor, reminded Hirway of his own conversations with other musicians. He thought of creating his own podcast, on which prominent artists would reveal the secret ingredients to their songs. Rather than assuming the risk of making the show on his own, he would take the idea to his old contacts at music streaming services, including Spotify and Rdio, and propose they hire him to make it in-house.

Nobody bit, and Hirway resumed work as a graphic designer to pay his bills. But, several months later, he tried again, this time approaching a podcast company, Maximum Fun, that distributed “The Memory Palace.”

“It was an entirely coherent idea that made immediate sense right from the start,” said Jesse Thorn, founder of Maximum Fun and host of the podcast “Bullseye with Jesse Thorn,” who greenlit “Song Exploder” in 2014. (The show is now distributed by Radiotopia.) “And he was such a skilled editor and producer that he needed very little help to get it up and running.”

If listening to “WTF” feels like hanging out in Maron’s singular, hyperactive brain, “Song Exploder” is, in its own way, equally personal. The show is a reflection of its creator’s constitutional minimalism. Each of its nearly 200 episodes, which have featured interviews with artists including Lindsey Buckingham, Bjork and Solange, is surgically edited (run times can be as short as 11 minutes) and fastidiously produced, interweaving isolated elements of the featured song with the artist’s anecdotes and reflections.

Hirway excises his own side of the interview, presenting the story as a continuous, first-person narrative. At first, this was in part a defense against his insecurities as an interviewer, but that worry proved misguided. What Hirway lacked in journalistic training he more than made up for in intuition and firsthand experience. 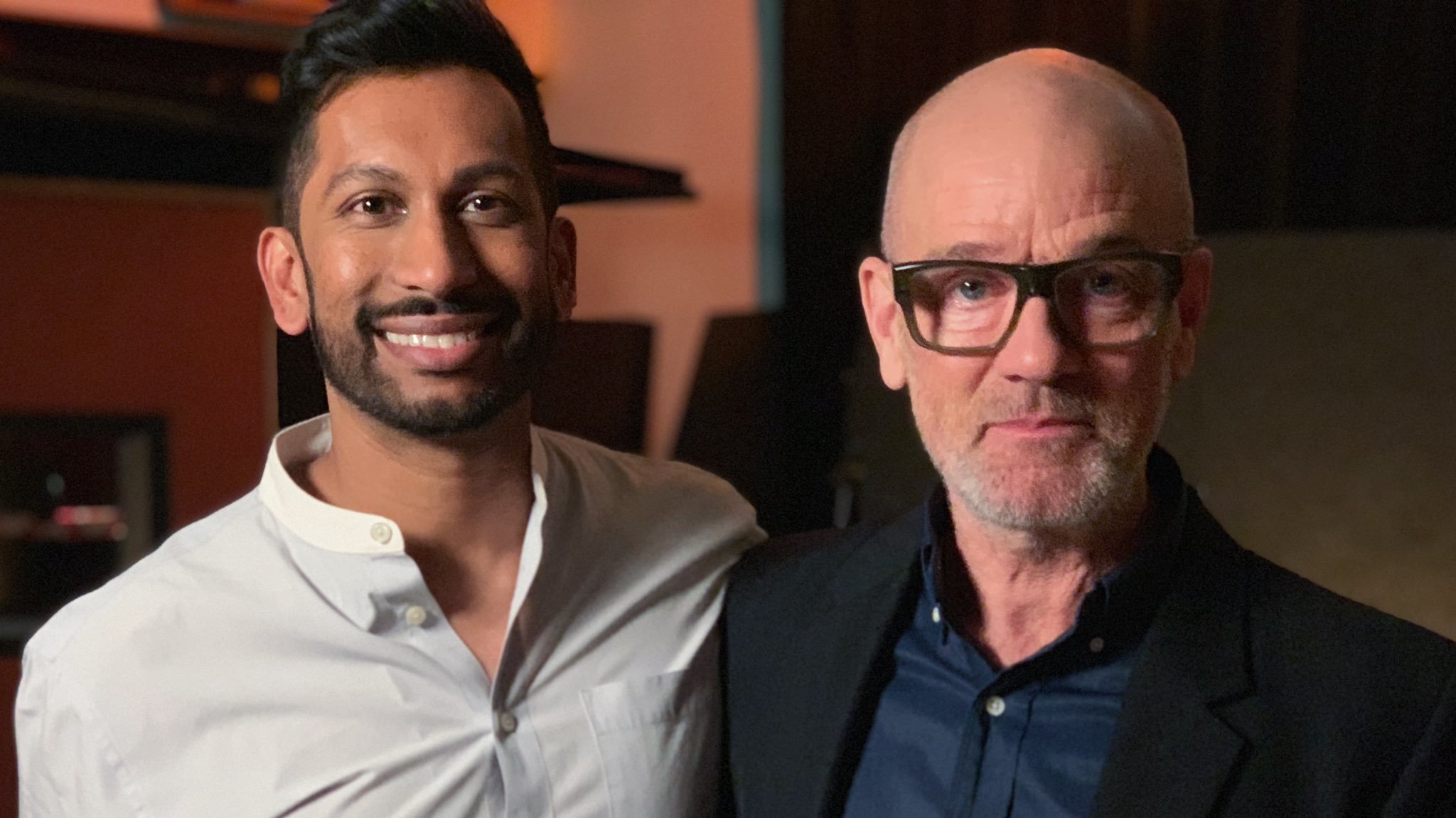 Hirway quizzed Michael Stipe (in pic) from R.E.M on how the song “Losing My Religion” was created

Hirway quizzed Michael Stipe (in pic) from R.E.M on how the song “Losing My Religion” was created

In the R.E.M. episode of the television show, we see him in action, quizzing the reticent Michael Stipe about “Losing My Religion.” At the beginning of the interview, Stipe coyly declares the protagonist of his most famous song a “total fabrication.” But then Hirway asks him to try inhabiting the character behind the lyrics. Before long, his subject, beginning to thaw, is ruminating at length about insecurity, disillusionment and the pain of heartbreak.

“OK, so maybe there’s a little bit of autobiographic material in there,” he eventually allows