Freshour, 45, Marysville, opened the debate by laying out her history as a 4th District native who was raised by a single mother on welfare.

As a person who benefited from programs such as Head Start, Freshour said she knows the struggles her constituents face. The COVID-19 pandemic has exacerbated existing problems in the state, such as food insecurity, access to health care and opportunities for quality education and job training.

In Jordan’s opening statement, the representative said the fundamental question on the general election ballot is, can America stay American?

Over the course of the pandemic, Jordan said Democrats have kept Americans from running their businesses, going to church and visiting their families and promoted cancel culture to silence conservative voices.

Jordan focused on national issues such as the right to bear arms, freedom of speech and defunding the police while asserting the values, principles and rights of Americans are at risk if Democrats are elected.

“People understand their rights are in jeopardy if Democrats are in control,” Jordan said. “That’s why you’ve got to elect Republicans in 28 days or your rights are going to be in jeopardy.”

Throughout the debate, Freshour turned her attention toward access to quality health care, which the litigation paralegal believes could provide a solution to issues such as gun violence, abortion and police brutality.

Jordan affirmed his anti-abortion position and said he would continue to fight for the rights of the unborn. Freshour argued being anti-abortion or pro-abortion rights is more complicated than just abortion. Pro-abortion rights means access to quality prenatal care so women can make informed decisions about their health, access to food and social safety net programs and opposition to the death penalty, she said.

Turning his attention toward law enforcement, Jordan said the far left has called for law enforcement to be defunded while allowing rioting, looting and destruction of businesses and personal property. The incumbent noted the election of Democrats would lead to a “scary” situation.

Freshour took the opportunity to take aim at Jordan for voting against the HEROES Act, which she said would have provided COVID-19 relief for communities to pay for first responders.

“We need to reimagine how police work,” Freshour said. “Because we need to ensure that police have the proper mental health care to deal with the trauma that they suffer every day on our behalf.”

She also said law enforcement officers need to be a part of the community in which they work to better serve it.

Jordan argued constituents should vote for him because he will continue to do what he’s promised to do, which includes lowering taxes, protecting the unborn, reducing regulations so the economy can thrive and holding bureaucracy accountable.

“So my job on the committees that I’ve been assigned to – the oversight committee, the judiciary committee – is to protect your liberties, to expose corruption that exists in our agencies when they come for you and your rights, and we’re going to keep doing that,” Jordan said.

Freshour contended that Jordan has advocated more for the current administration and billionaires than his constituents in the 4th District and has not focused on bringing jobs to the district, fighting for health care or improving schools in the district.

“The reason I’m part of this race is because I want to ensure that we have people who are protecting jobs and protecting the economy and protecting workers and ensuring that workers have the benefits to survive,” she said. “But also to ensure that the generation that follows me don’t have a trillion dollars of added debt because we gave a tax cut to the billionaires. And by we, I mean Mr. Jordan. The bill will come due eventually.” 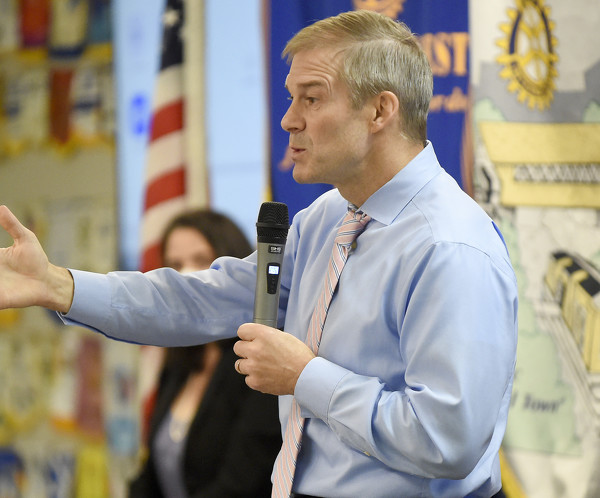