With Republicans screaming on social media for Rep. Devin Nunes (R-Tulare) to “RELEASE THE MEMO” and expose all sorts of alleged FBI wrongdoing, what does somebody, presumably a Democrat, do?

The Hill’s Josh Delk caught wind of what was going Tuesday and wrote this story. Janz, a Fresno County assistant district attorney, denied to Delk that he was behind the internet trickery.

“I’m proud to be running a campaign that’s inspiring people across the nation. I was pleasantly surprised to see www.nunesmemo.com redirect to my site. Devin Nunes might have Russian bots doing his bidding on Twitter but you can’t beat good old-fashioned people power,” Janz told The Hill.

No Tough Races for Nunes Since 2002

Since Nunes won a rough-and-tumble Republican primary in 2002 and then cruised to victory and a congressional seat in the general election, Nunes has dominated underfunded, low-name ID opponents. Even after the redrawing and renumbering of Nunes’ district following the 2010 Census, he registered wipeout victories with 62% of the vote in 2012, 72% in 2014, and 68% in 2016.

Nunes has become another Nancy Pelosi — that one person in the House’s upper ranks that everyone in the opposing party loves to hate.

But Janz is a far more formidable opponent than Nunes is accustomed to potentially facing. Credit for some of that goes to Janz. He’s smart, media savvy and hardworking.

His campaign also fully realizes that the candidate must be portrayed as someone who is a regular guy and not a crazy left-winger if he is to win District 22. 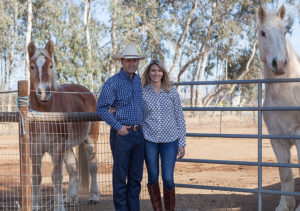 Thus, on Janz’ campaign website you’ll see his biography emphasized. He grew up in the district, graduating from Visalia’s Redwood High School. He, the campaign website says, “has risen quickly through the ranks of the District Attorney’s office and his most recent assignment was to the Violent Crimes Unit.”

This sends a clear message: Janz is tough on crime. Nunes might talk about crime prevention, but Janz has sent bad guys to prison for long stretches.

There’s also a photo of Janz with his wife, Heather, in front of horses. They are wearing jeans and Janz sports a cowboy hat. They appear natural, not like a politician’s family trying to be something they’re not.

Moreover, Nunes’ controversial actions as House Permanent Select Committee on Intelligence chairman have brought a big national spotlight to the race. Nunes has become another Nancy Pelosi — that one person in the House’s upper ranks that everyone in the opposing party loves to hate.

Way Too Early To Predict Outcome

I don’t know how this race will end up.

Will it help or hurt Nunes — castigated as Trump’s errand boy by Democrats — that district voters liked him a lot more than Trump in the 2016 election?

A breakdown of the ballots shows that Trump only captured 52.1% of the votes in conservative District 22 while running against the unpopular Hillary Clinton.

Nunes’ backers surely will point to his 68% vote result in 2016 as proof of his popularity. They also will discount the anti-Trump energy of Democrats.

Nunes’ friends also will have all the money they need to cast their man in the best possible light.

In the 2014 and 2016 elections, Nunes received a combined $3 million in campaign contributions from political action committees. The sky’s the limit in 2018 for Nunes. PBS reported Tuesday that the conservative billionaire Koch brothers planned to spend between $300 million and $400 million defending House Republicans in the midterm elections.

As of today, it appears that Nunes’ seat is safe. The highly respected Cook Political Report lists CA-22 as “solid Republican” and Nunes enjoying a +8 advantage.

Janz appears to have a clear edge over his Democratic rivals for the June primary. If Janz doesn’t win, the race is over for the Democrats.

After that, it’s a long hard slog to November.

That will provide plenty of time for more internet/social media hijackings.

And ample time for a majority of district voters to decide if they are proud of Nunes’ efforts to root out alleged deep-state corruption. Or embarrassed by his alleged efforts to deflect attention from Special Counsel Robert Mueller’s investigation into Trump’s 2016 election campaign and its ties to Russian interference in the 2016 election.

Yes, Janz is a legitimate candidate. But this race ultimately is about what District 22 voters think about Nunes’ performance.