People of all ages joined together on Sept. 24 in protest of Line 3, the filibuster, and neighborhood drilling. Strikers advocated for the Reconciliation Bill and the Green New Deal, calling for representatives to stop compromising their futures.

As they marched, protesters chanted, “What do we want? Climate Justice! When do we want it? Now!”

Strikers assembled at Embarcadero Plaza to listen to rallying speakers who expressed their demands before marching through the city streets.

One of their demands included stopping Line 3, which is a proposed pipeline expansion that would extend from Alberta, Canada, to Superior, Wisconsin, transporting millions of sand tar.

Many were quick to object to the pipeline due to concerns over potential oil spills and a larger carbon footprint. Indigenous opposition was especially prominent.

“The pipeline is going to destroy native land, especially Anishinaabe territory. We are here to fight for our Anishinaabe people and for all the ecosystems that are going to be affected,” said a leader at the strike.

According to StopLine3, the Anishinaabe people harvest wild rice grown in watersheds, which the pipeline would cross, violating their treaty-protected rights and poisoning their communities.

Another leader spoke against California Senator Dianne Feinstein’s actions regarding the filibuster.

According to the New Yorker, Feinstein does not endorse the Green New Deal. She believes that it may not be supported by the Senate and has her own proposition instead.

Assembled strikers also addressed the oil drillings Gavin Newsom continues to permit. They raised concerns over the prominence in primarily low-income neighborhoods, as well as the detrimental effects on residents’ health.

“For years, health professionals and scientists have told us about the damage that oil drilling in neighborhoods is doing to our lungs and to our bodies,” a third speaker said. “We are demanding a 2,500 feet health and safety buffer zone from drilling sites.”

Some of those issues include headaches, upper respiratory illness, nausea, nosebleeds, and a possible increase in cancer risk, according to a University of Southern California (USC) study. Residents within 3,280 feet of this oil site reported these symptoms as effects of living near oil developments.

“This is a bill through which many politicians compromise to pass a group of policies that would help to protect our futures,” another speaker said. “They have the money to invest and fund it, so they need to take action now.”

This was in reference to the current reconciliation bill in Congress that would include clean energy incentives, housing, child care financial aid, and the expansion of Medicare and would be funded by Biden’s tax and spending proposals. 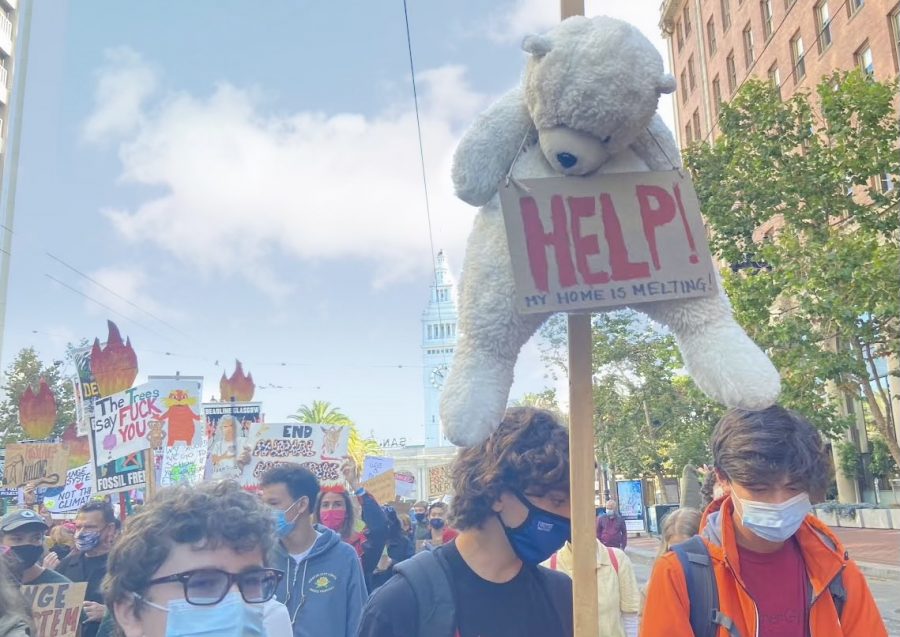 Students at the strike hold up a bear with a sign reading “Help! My home is melting!”

Protesters wore yellow, orange, and red at the strike to symbolize California’s wildfires. They pinned screen-printed cloths reading “Defund Line 3,” “Defund Climate Chaos,” and “#UpRootTheSystem” onto their clothes and backpacks.

“We’re running on borrowed time, so it’s important for us to do everything we can, as soon as possible, so that we can have a future for us and other generations,” said attendee and Carlmont High school sophomore Carolyn Healey.

At its root, the strike drew attention to the intersectionality of social justice and climate action.

“Climate change and social justice go hand in hand because the effects of climate change are greatly felt by those in poorer communities and people of color,” said protester Milo Sperry.

On climate actions such as the strike, Kamille Lang, who works for the San Mateo County Office of Sustainability, expressed her view on environmental advocacy.

“You are not in this alone, but if you aren’t in it at all, you are not trying,” Lang said.