The president of the United States chose Microsoft’s data center construction site in the Elk Grove Technology Park to encourage Americans to get vaccinated and to push his Build Back Better infrastructure agenda, which has two major spending bills pending in Congress.

President Joe Biden was on hand to recognize Clayco, the company building Microsoft’s data center campus who complied with Biden’s federal mandate that all companies with more than 100 employees ensure all employees are vaccinated against COVID-19. 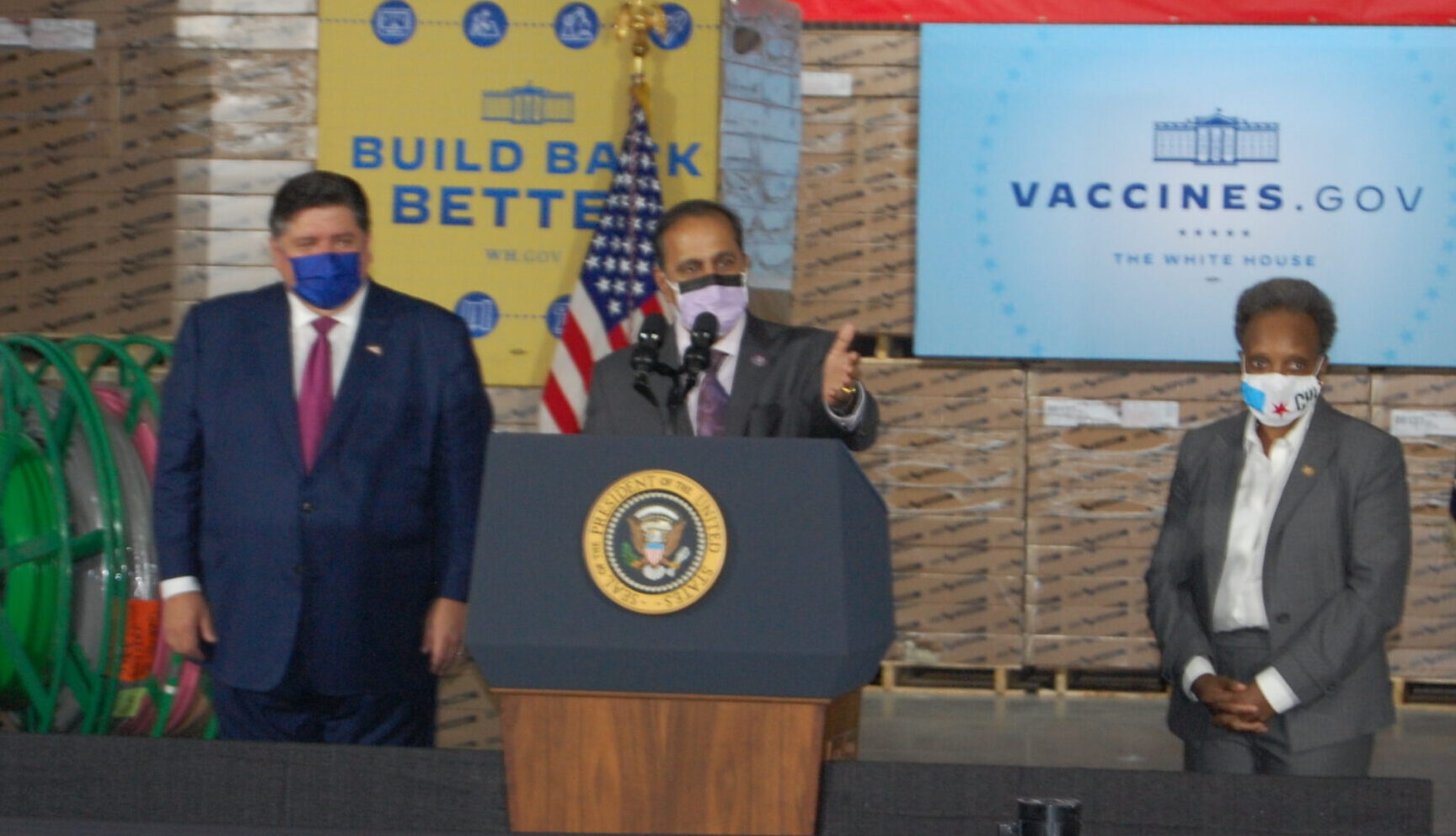 Along the theme of COVID vaccinations, Krishnamoorthi reflected that this month is the start of the holiest month in the Hindu religion, ending in the Diwali Festival of Lights. He said the holiday season celebrates “light over darkness and knowledge over ignorance.” He said when Biden recently encouraged corporations to mandate COVID vaccinations, 95 million people were still unvaccinated in the country. Since corporations, federal government, and federal government contractors are now requiring all employees to be vaccinated, that number has dropped to 65 million.

Biden took time during his remarks to call out local elected officials by name. 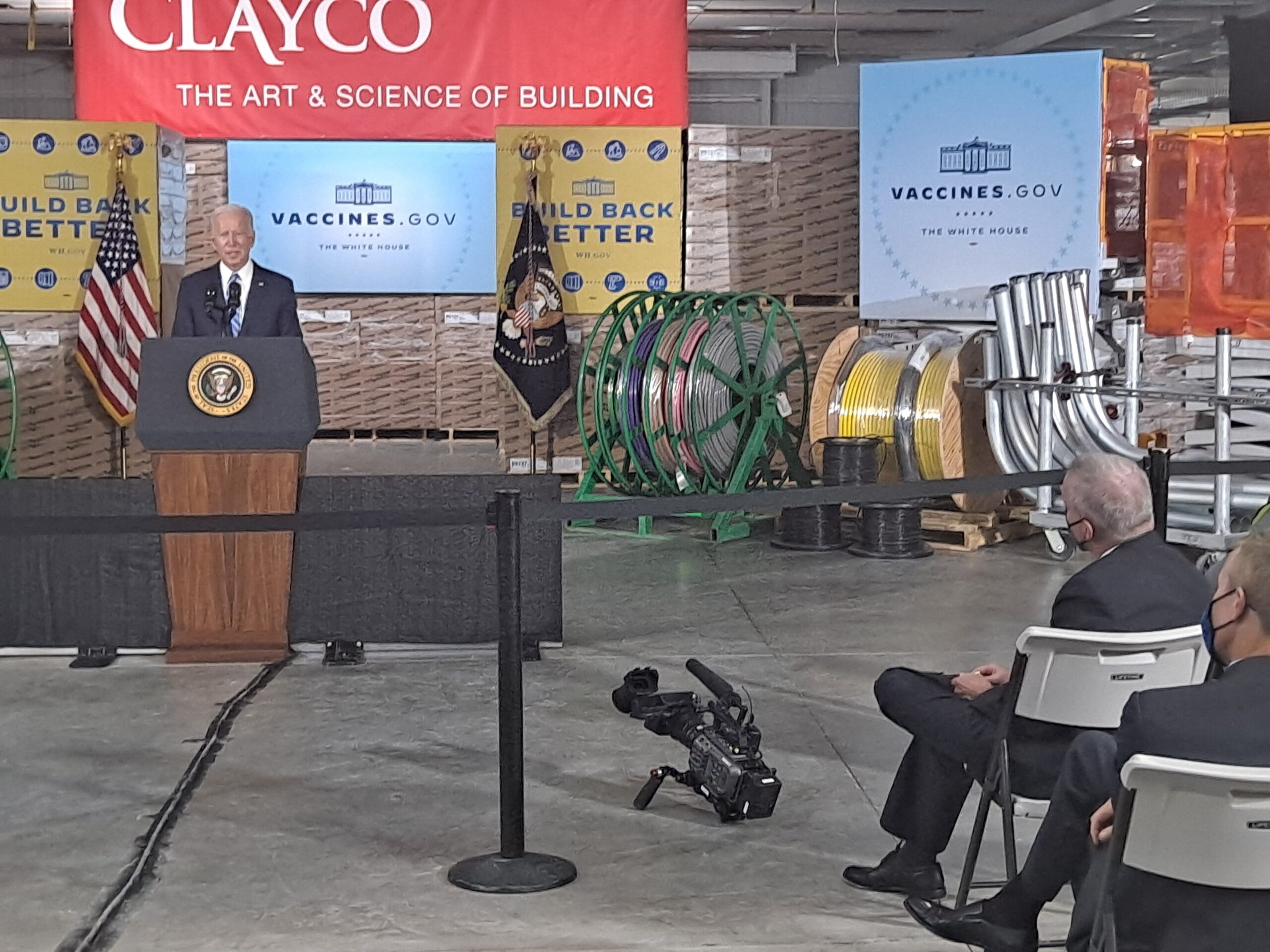 Biden said vaccinations are popular and are working in spite of a vocal minority opposed to vaccinations. He said the economy would not fully recover until people were comfortable going out, which vaccinations would fix.

The president said vaccine mandates for corporations and federal employees and contractors are working, with deaths from COVID down 40% and hospitalizations down by 25% just within the last few weeks. Biden said COVID cases are overwhelming hospitals, taking away the ability for others to have elective medical procedures completed.

Biden said he met with officials from Chicago-based United Airlines, who were at the event. The president said the company instituted a COVID vaccination mandate and said of 67,000 United workers, 66,800 were vaccinated.

Johnson said he is a “big fan” of vaccinations, but said he believes it should be a personal choice by individuals. He said Elk Grove Village does not have a vaccine mandate for its employees but said 90% of village employees are vaccinated. Johnson said the village is following county, state, and federal health mandates, and would continue following those mandates if there were a local vaccination mandate. 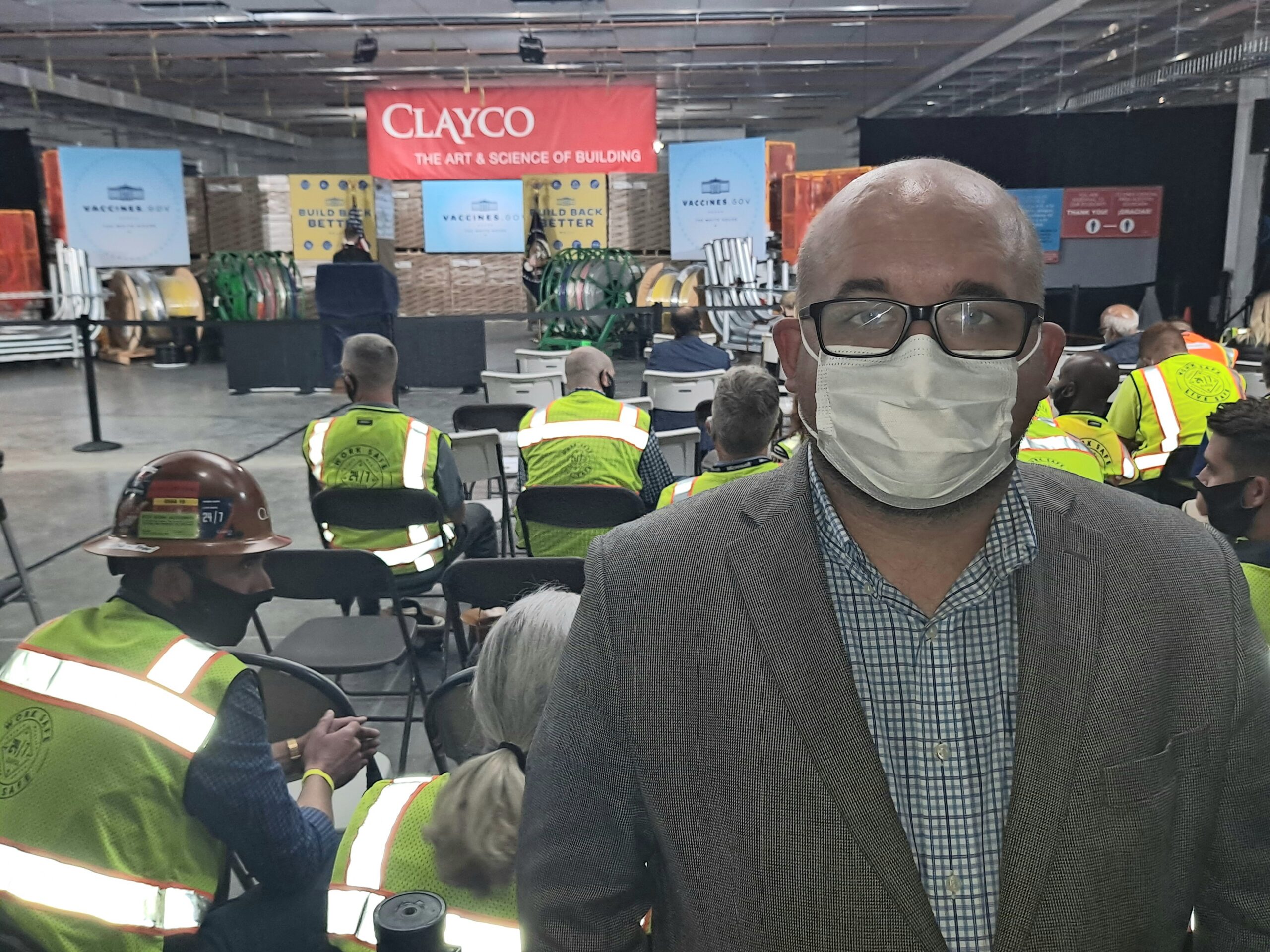 Before the president made his remarks, he toured some of the Microsoft facility already built, with Pritzker and a small number of pool reporters.

“We’ve attracted a whole bunch of data centers to the state because we changed the law to make it easier for them to move here and to create jobs here in the construction industry,” Pritzker told Biden, according to the pool report. “And they’re all union,” Biden interjected. The president would bring up the union labor building the data center again during his remarks.

Workers for Clayco, building the Microsoft center, explained to Biden that the construction of the center is expected to be completed during the first quarter of next year and that 123 different companies had been employed over 10 months during the project. 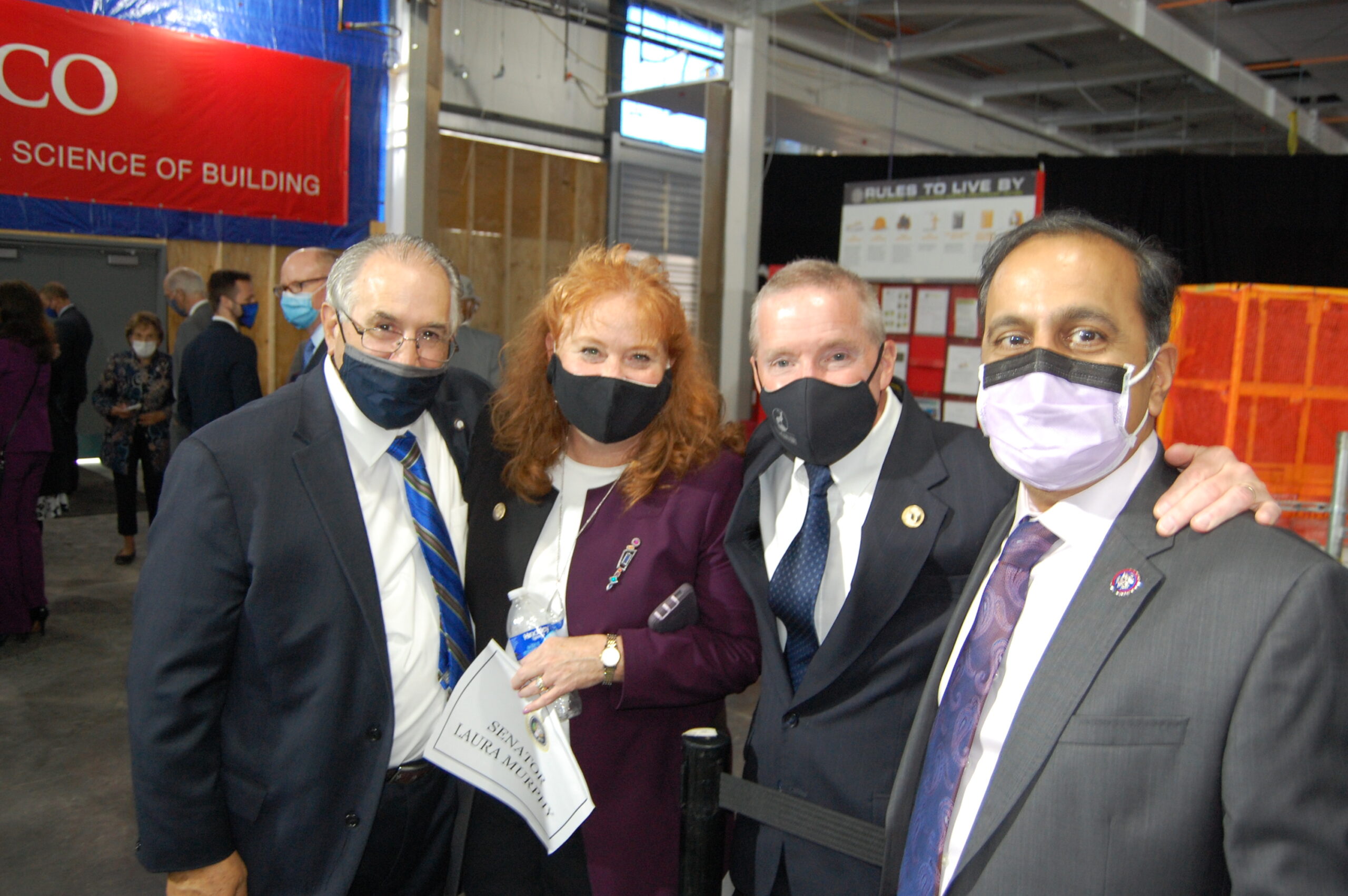 Mayor Johnson said when he was discussing the possible data center project in Elk Grove Village with Microsoft officials, he said they waited until the legislation granting significant incentives for data centers to locate in Illinois was made law before signing the agreement.

Murphy said the Midwest is great for data centers, as it does not have the same storms, including hurricanes, other areas of the country do, adding “data centers love the cold.” Data centers require large amounts of water and electricity to operate. The water is used as a coolant to keep buildings cool so data servers do not overheat.

“The future is about the investments we make,” U.S. rep. Brad Schneider (D-10th) told the Journal after the event. “We’ve lagged on investments (in infrastructure), affecting our ability to move people and move goods looking forward.” 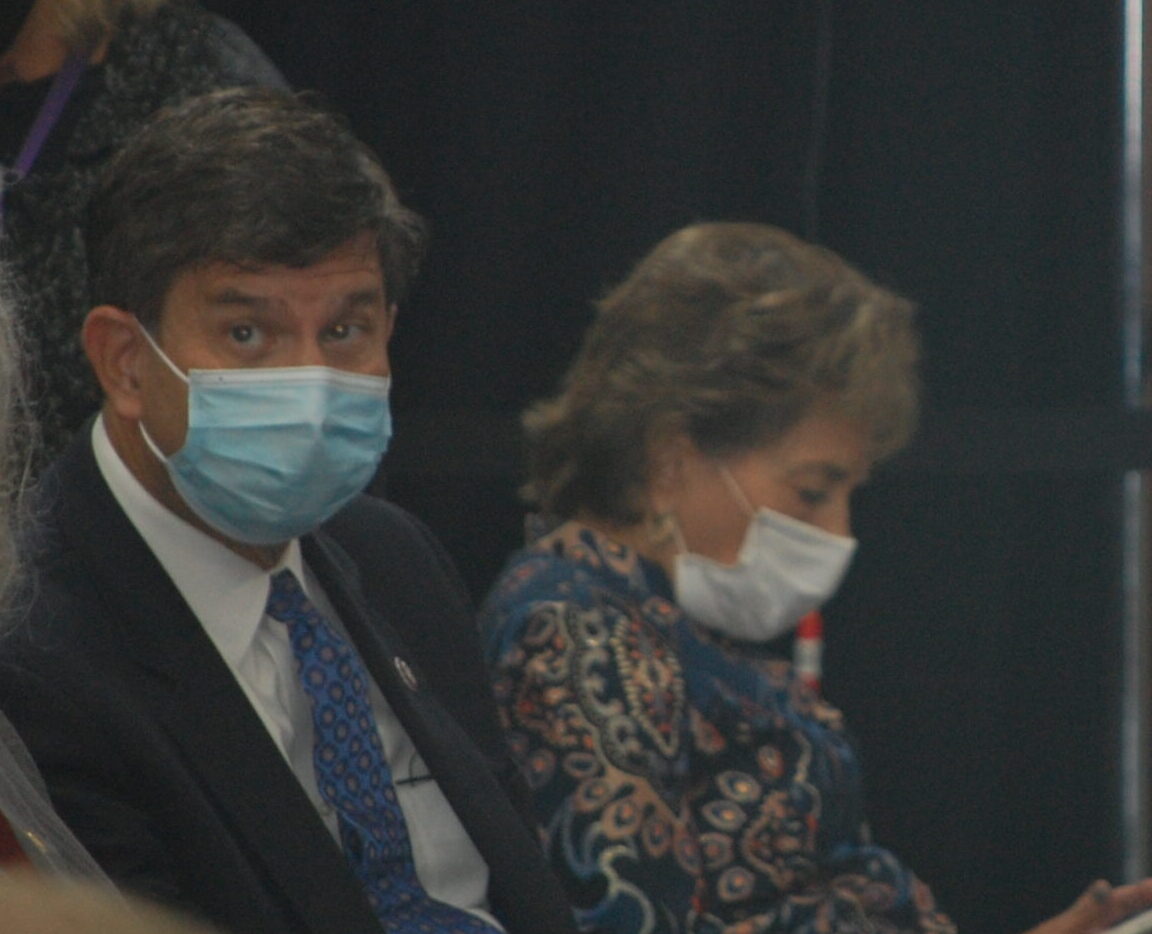 The two bills have a high price tag, one costing $1 trillion for physical infrastructure, the other proposed at $3.5 trillion for what some lawmakers call a social safety net infrastructure bill, and others, including Schakowsky, call the “Build Back Better,” bill, using Biden’s campaign slogan.

Schakowsky said she knew of a local family where the husband was laid off during the worst of the COVID pandemic. However, because of the child tax credit, which was part of a federal COVID relief bill, the family was able to continue paying their bills. 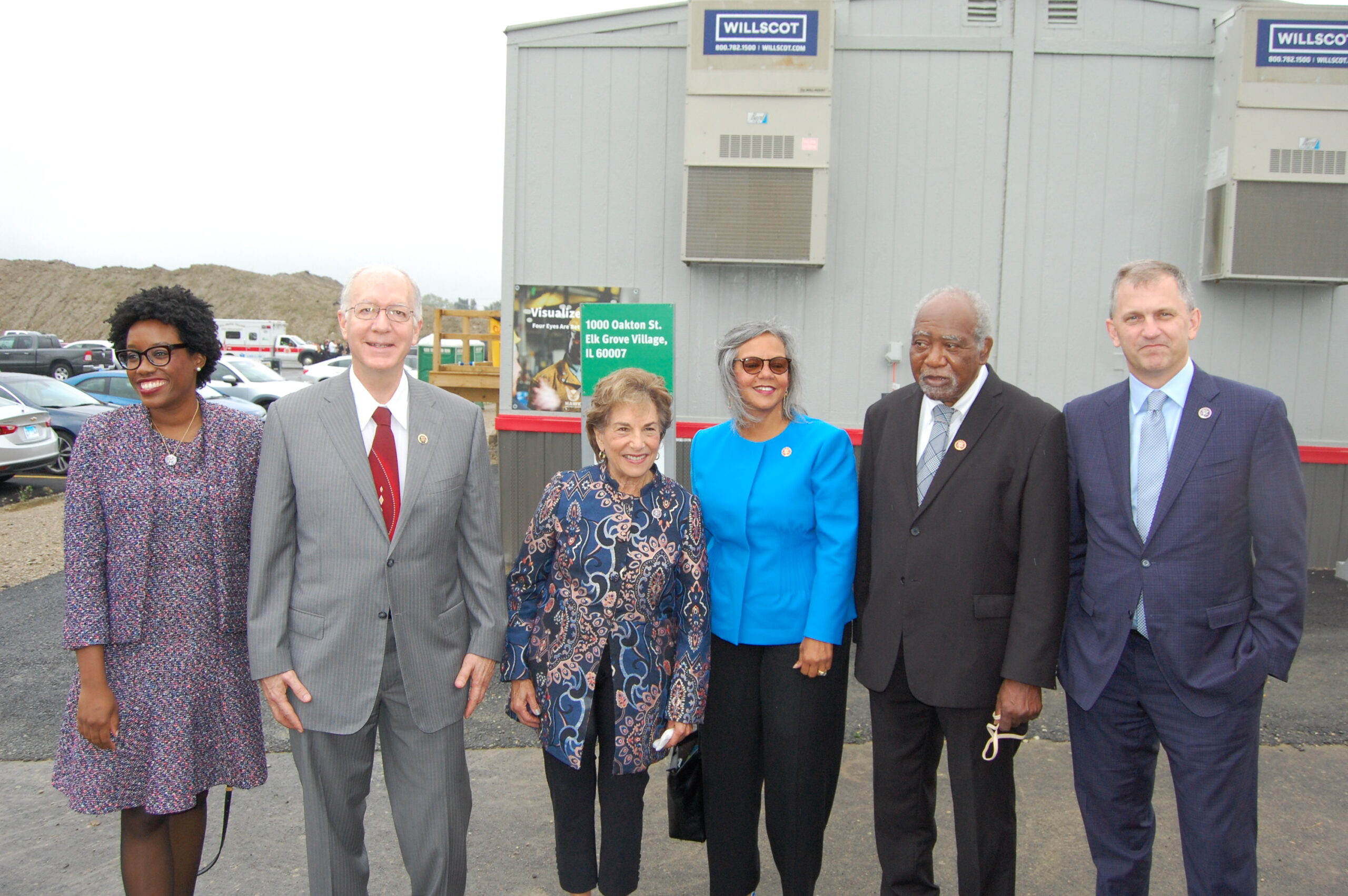 Support local news by subscribing to the Journal & Topics in print or online.