In remarks at the White House this morning, President JOE BIDEN again decried the draft Supreme Court opinion that would strike down Roe v. Wade, and asked where its implications would logically stop.

It’s an important shift in Biden’s messaging, says LA Times’ Eli Stokols: “That’s the most deliberate Biden has been yet in trying to define the GOP as ‘extreme’ ahead of the midterms, seizing on Rick Scott’s agenda and the SCOTUS draft overturning Roe. But he avoids saying ‘Trump,’ going instead with ‘this MAGA crowd’ and ‘my predecessor.’” ICYMI: Jonathan Lemire reported earlier this week that Biden and his team were preparing to ramp up their attacks against Republicans ahead of the midterms.

— CNN’s Manu Raju (@mkraju): “Sen. [JOE] MANCHIN, who was lone Dem who voted for [Justice BRETT] KAVANAUGH, told me when asked if he believed Kav was telling truth on Roe in 2018: ‘We are going back through all the things we have — we had meetings with him — to find out what he said and how it was actually presented to us.’”

— Flipping the script: “For nearly half a century, Republicans have railed against ‘unelected judges’ making rulings that they claim disenfranchise voters from deciding for themselves what laws should govern hot-button issues,” WaPo’s Michael Scherer reports. But since the Roe news, “Democrats have been the ones embracing that complaint, flipping the script as the party vents its frustration with elements of the U.S. system that have empowered a minority of the country’s voters to elect lawmakers who have successfully reshaped the high court.”

— Glimpse at a post-Roe America: “A modern-day adaptation of underground abortion networks that helped people access care when the procedure was illegal, the Auntie Network stands alongside formal organizations like the Brigid Alliance and the National Network of Abortion Funds that coordinate travel and remove financial barriers to getting abortions. But as the prospect of terminating a pregnancy in America faces staunch restrictions in large swaths of the country, the Reddit group offers a glimpse into a post-Roe era when getting an abortion will require an influx of community-based aid to organize and assist,” writes WaPo’s Pranshu Verma.

Good Wednesday afternoon, and May the Fourth be with you.

Amazon’s paid leave policy gives hourly employees like Elizabeth up to 20 weeks of fully paid time to be with their new families. “He’s only going to be really little once,” she said. “Spending that extra time with him just meant so much to me.”

HAPPENING TODAY — Andrew Desiderio notes in a Twitter thread: “The Senate will vote today on up to 28 motions to instruct conferees on the China/competition bill. These are non-binding, but there are a few interesting ones. Two of them will essentially be a referendum on the Biden admin’s Iran nuclear talks.

PROXY BATTLE — Rep. MARJORIE TAYLOR GREENE (R-Ga.) has made her opposition to proxy voting known. She’s even introduced legislation to ban the practice. But she herself has “voted remotely 22 times and cast 135 votes on behalf of fellow Republicans, according to an Insider review of over 700 roll call votes taken by the House between May 20, 2020 and April 30, 2022,” Insider’s Bryan Metzger reports. “The Georgia Republican’s go-to buddy for when she can’t make it to a vote herself appears to be Republican Rep. PAUL GOSAR of Arizona, who’s cast all 22 of her proxy votes.”

WINNING TIME — Marissa Martinez has a helpful look at all of the Trump-backed candidates who won Tuesday’s primaries. Spoiler alert: the former president had a great night. “In Tuesday’s Indiana and Ohio primaries, Trump once again ran the table: All 22 of his endorsed candidates won. He threw his support behind almost every House GOP incumbent running for reelection — and a few hopefuls in open seat primaries — and his preferred candidate won in every case.”

VICTORY LAP — Biden this morning issued a statement congratulating Rep. SHONTEL BROWN (D-Ohio) for her repeat win over NINA TURNER: “Shontel Brown’s primary victory last night was an important step forward toward building a better Ohio and a better America. I was proud to endorse Shontel in her primary bid for re-election because she has been a strong leader in Congress and a partner in the work to cut costs and create jobs.” Anthony Adragna has more for Congress Minutes

HEADS UP — NYT’s @katieglueck: “As expected, ‘the Iowa Democratic Party intends to apply to the DNC’s Rules and Bylaws Committee for a waiver to hold its presidential nominating contest during the pre-window period,’ per letter to DNC chair and Rules+Bylaws Committee chair.”

FED FILES — The Fed is meeting today to outline a series of steps to curb inflation “without causing a recession” — though as NYT’s Jeanna Smialek writes, “that is far from guaranteed.” More on the stakes: “Whether the central bank can gently land the economy is likely to serve as a referendum on its policy approach over the past two years, making this a tense moment for a Fed that has been criticized for being too slow to recognize that America’s 2021 price burst was turning into a more serious problem. The Fed chair, JEROME H. POWELL, and his colleagues are expected to raise interest rates half a percentage point on Wednesday, which would be the largest increase since 2000.”

Details are expected to be released at 2 p.m., with Powell scheduled for a news conference at 2:30.

TRADE DEFICIT HITS NEW HIGH — “Strong U.S. demand for computers, vehicles and oil helped drive the U.S. trade deficit to a record of $109.8 billion in March,” WSJ’s Harriet Torry reports. “The Commerce Department on Wednesday said the trade deficit widened by 22.3% from the prior month. Imports rose by 10.3% to $351.5 billion as the U.S. took in far more goods than it exported. Exports, however, also rose strongly — increasing 5.6% — but didn’t keep pace with imports amid global uncertainty stemming from the conflict in Ukraine.”

COMING ATTRACTIONS — Biden will host a “conference on hunger, nutrition and health in September,” the White House announced today, per the AP. “The gathering will be the first of its kind by the White House since 1969.” 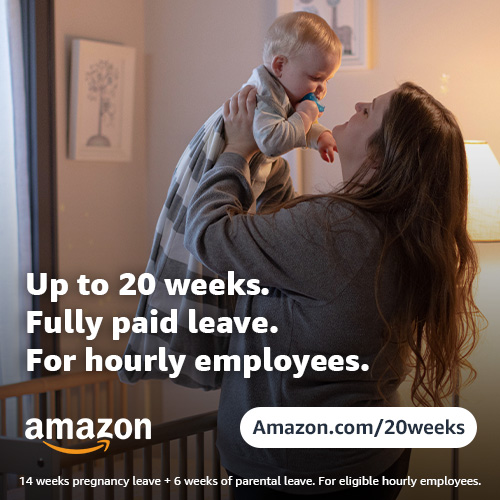 Amazon’s parental leave policy allowed Elizabeth to be there for the little things.

— “The European Union took a major step on Wednesday toward weakening President VLADIMIR V. PUTIN’S ability to finance the war in Ukraine, proposing a total embargo on Russian oil, as Moscow demonstrated its destructive power with missile strikes in the west of the country and deadly attacks in the east,” NYT’s Jane Arraf, Matina Stevis-Gridneff and Matthew Mpoke Bigg report. “The leader of the E.U. executive branch, URSULA VON DER LEYEN, announced a plan to halt imports of crude oil in the next six months and of refined oil products by the end of the year. If approved this week as expected, it would be the bloc’s biggest and costliest step yet toward supporting Ukraine and ending its own dependence on Russian fossil fuels.”

— “In small towns and villages across Ukraine that fell under Russian occupation in February and March and have since been liberated, the fog of war has been replaced by the fog of conspiracy and suspicion,” write WaPo’s Robert Klemko and Isabelle Khurshudyan from Ivanivka.

— And Christopher Miller has a harrowing report from Kyiv: “Funerals and wine bars: Kyiv’s return to normalcy isn’t normal at all”

‘THE VANISHING VARIANTS’ — NYT’s Emily Anthes writes of the coronavirus variants that cropped up but never took hold, and what they mean for the pandemic. “For every Delta or Omicron there is a Gamma, Iota or Mu, variants that drove local surges but never swept to global dominance. And while understanding Omicron remains a critical public health priority, there are lessons to be learned from these lesser lineages, experts say. … Studies of the also-rans have shed light on surveillance gaps and policy blunders — providing more evidence that America’s international travel bans were not effective — and on what makes the virus successful, suggesting that in the early phase of the pandemic, transmissibility was more important than immune evasion.”

NOKO’S SABER RATTLING — “North Korea launched a ballistic missile toward its eastern waters on Wednesday, South Korean and Japanese officials said, days after North Korean leader Kim Jong Un vowed to speed up the development of his nuclear weapons ‘at the fastest possible pace’ and threatened to use them against rivals. The launch, the North’s 14th round of weapons firing this year, also came six days before a new conservative South Korean president takes office for a single five-year term,” AP’s Hyung-Jin Kim, Kim Tong-Hyung and Mari Yamaguchi report from Seoul.

TRANSITIONS — Tooshar Swain and Josh Reynolds are joining Americans for the Arts. Swain will be director of public policy and previously was director of public policy and advocacy at the National Association for Music Education. Reynolds will be government affairs coordinator and previously was government affairs manager at Associa. … Bill Turenne Jr. has joined Chevron’s D.C. office as external affairs adviser. He is the former director of comms and external relations of the Energy Department’s Artificial Intelligence & Technology Office in the Trump administration and is also a DOD alum. …

ENGAGED — Zach Graumann, CEO of Longshot Strategies, and Carly Reilly, chief of staff at BLOCK::BLOCK, got engaged on Saturday in New York. The two met on the Andrew Yang 2020 presidential campaign, where Graumann was campaign manager and Reilly was finance director. The proposal took place at Reilly’s favorite ramen spot by the old campaign office, and the couple then celebrated with friends and family including Andrew and Evelyn Yang, Shelby Summerfield, Conrad Taylor, Ethan Dunn, Randy Jones and Katie Dolan at The Skinny Bar on Orchard Street. Pic

WE VALUE YOUR OPINION: Please take a 1-minute survey about one of our advertising partners.