A Minneapolis judge has delayed the trial of two former cops charged in George Floyd’s May 2020 death to improve the chances they get a fair trial.

Tou Thao, 35,  and J. Alexander Kueng, 28, had been set to face trial next week on charges of aiding and abetting, as well as second-degree murder and second-degree manslaughter in Floyd’s death.

They are accused of helping to restrain Floyd, a 46-year-old black man who was handcuffed at the time of his death, as Kueng knelt on Floyd´s back and Thao kept bystanders from intervening during the 9 1/2-minute restraint.

But on Monday, Hennepin County Judge Peter Cahill ordered that the trial be delayed until January 5, citing recent events like the May 18 guilty plea of their co-defendant, former Officer Thomas Lane, and the February conviction of the three officers on federal charges for violating Floyd’s civil rights.

He said those two events and the publicity surrounding them are significant enough to make it difficult for jurors to presume that Thao and Kueng are innocent of the state charges against them, so he ordered the delay, just shy of seven months, to diminish the effects of that publicity.

Still, Cahill, denied a defense motion for a change of venue due to the extensive pretrial publicity surrounding the case as well as a motion  by a group of media organizations to reconsider his decision to prohibit live coverage of the proceedings.

He said Monday he may reconsider that decision if the Minnesota state court system revises its rules on cameras in the courts by January 4.

Cahill has previously presided over the trial of former Police Officer Derek Chauvin, who kneeled on Floyd’s neck for 9 1/2 minutes as he cried, ‘I can’t breathe.’

Chauvin, 46, was convicted of second-degree murder in that trial, and was sentenced to 22 1/2 years in prison.

Floyd’s death – which had been video taped and shared widely on social media – led to protests worldwide and a national reckoning on racial injustice. 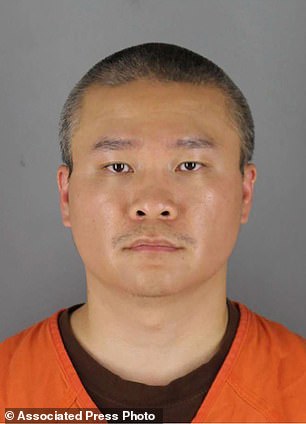 A Minneapolis judge has decided to postpone the trial for former Minneapolis police officers J. Alexander Kueng, left, and Tou Thao, right, who are  charged with aiding and abetting, as well as second-degree murder and second-degree manslaughter in the May 2020 death of George Floyd 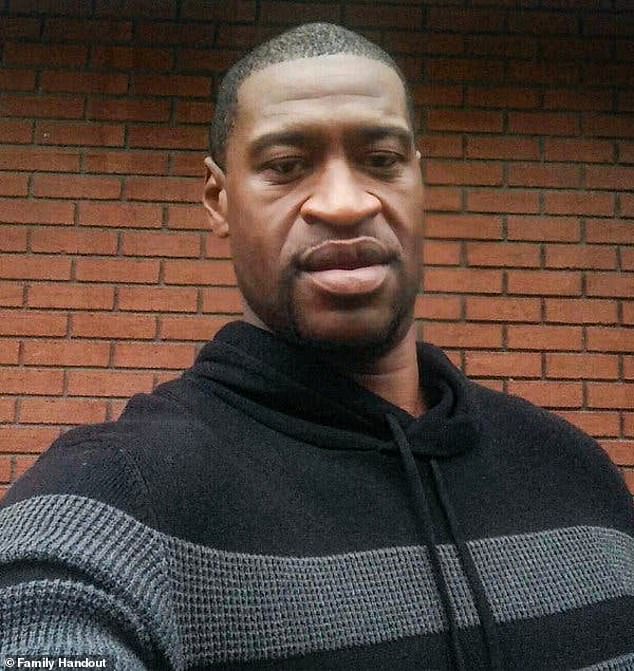 Floyd, 46, was murdered by Derek Chauvin after he was placed on arrest in Minneapolis on May 25 2020 on suspicion of using a counterfeit $20 bill 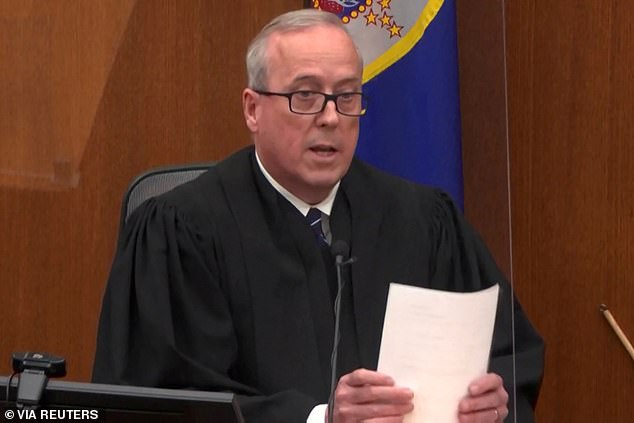 On Monday, Hennepin County District Judge Peter Cahill announced he would postpone Kueng and Thao’s trial on charges of aiding and abetting, as well as second-degree murder and second-degree manslaughter in Floyd’s death

Bob Paule, an attorney for Thao, said he thought the decision ‘was a thoughtful and well-reasoned decision by Judge Cahill.’

Minnesota Attorney General Keith Ellison, whose office is prosecuting the case, said in a statement: ‘It’s unfortunate for the victims, the witnesses, and community that the opportunity to seek justice has been delayed. The State was ready for trial next week and will be ready next January.’

Questionnaires will then be mailed to a new pool of ‘several hundred’ potential jurors around September 1, and opening statements are set for January 30.

In denying a change of venue, Cahill wrote that he is satisfied that a fair and impartial trial can be held in Hennepin County ‘eventually,’ noting that it´s the most populous and diverse county in the state.

He said attorneys will get to select jurors from a panel ‘that will surely exceed 200’ after the lengthy questionnaires designed to screen out bias are returned. 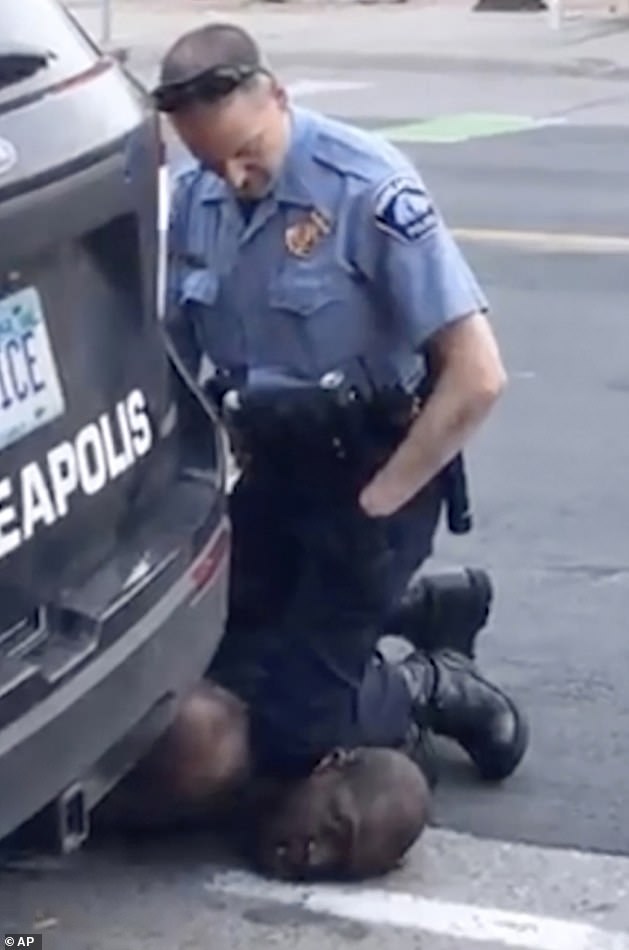 Former police Officer Derek Chauvin kneels on the neck of George Floyd, a handcuffed man who was pleading that he could not breathe 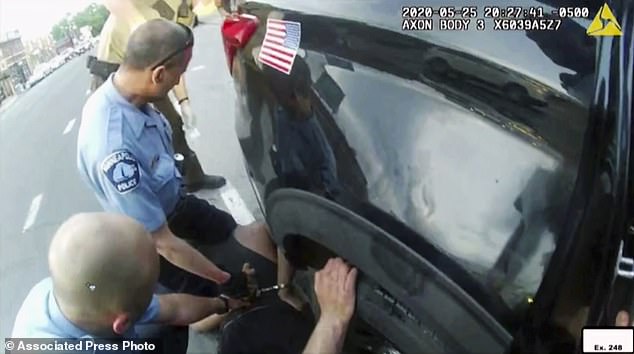 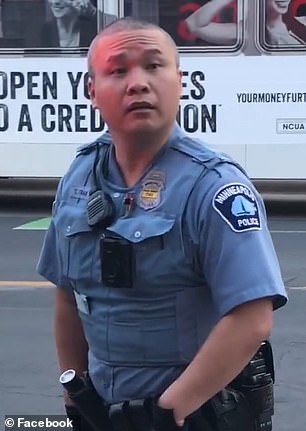 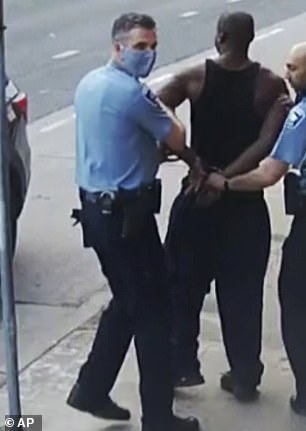 The three officers gathered around Floyd, who was laying on the street, as Chauvin put his knee on his neck

Cahill’s ruling comes just weeks after Lane, 39, pleaded guilty to aiding and abetting second-degree manslaughter in Floyd’s death – during which he held Floyd’s legs down.

In exchange for the plea deal, state prosecutors agreed to dismiss a charge of aiding and abetting second-degree unintentional murder.

His attorneys will now recommend a sentence of 36 months in prison, according to ABC News. If he had gone to trial, though, and was convicted on all charges, Lane could have faced a maximum sentence of 40 years in prison.

And in February, all three officers were convicted by a federal jury of violating Floyd’s civil rights by failing to intervene or provide aid as their senior officer, Chauvin, kneeled on the back of Floyd’s neck for more than nine minutes.

But Alan Tuerkheimer, a Chicago-based jury consultant, said the reason for the postponement seems like ‘strange rationale.’ He said he doesn´t see how a potential juror´s bias would subside with the passage of time.

He also said with effective questioning, ‘jurors with bias can be weeded out today or tomorrow or in early 2023,’ and added that while other events that happen between now and January will consume jurors´ minds, ‘feelings about these cops will not just vanish over time.

‘As trial approaches in January it will all come back to those who followed this case,’ he said. ‘For those who haven´t, the passage of time doesn´t matter.’

Mike Brandt, a Minneapolis defense attorney who has been following the case, meanwhile, said although Cahill’s stated reason for the postponement is to dissipate the case’s notoriety, the decision is also likely pragmatic.

He explained that pushing the trial back allows time for Thao and Kueng to be sentenced on their federal convictions first, increasing the likelihood of a plea deal with the state.

‘They may not be on the radar, but in my opinion, this enhances the options for a settlement,’ Brandt said, adding that once the federal sentences are known, the thinking could be: ‘If we´re going to be doing this amount of time anyways, and the state agrees to this amount of time, why would we risk going to trial?’ 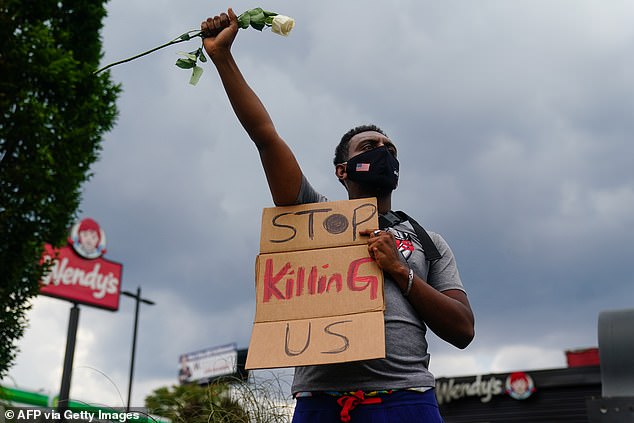 Floyd’s death sparked a worldwide protests against police brutality. A man is seen here in June 2020 holding a sign and white rose in one of the Black Lives Matter protests 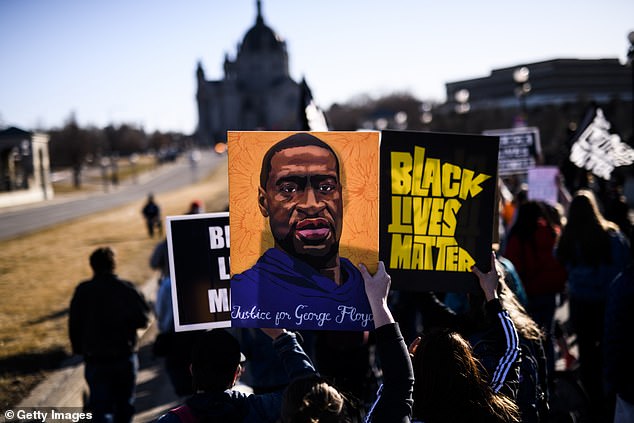 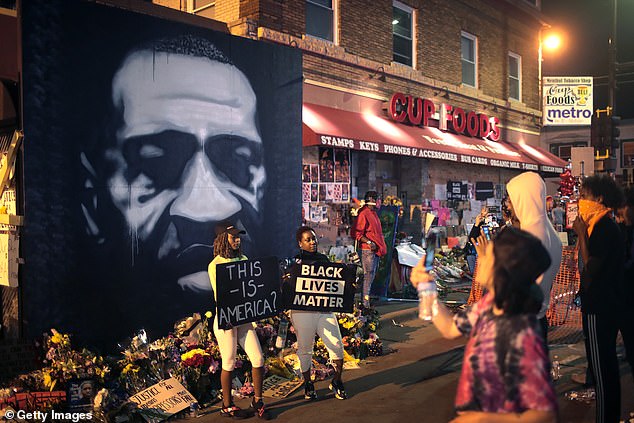 A memorial was also set up in Minneapolis, Minnesota following his death

Chauvin has been in prison since his state murder conviction, while Thao, Keung and Lane remain free on bail pending their sentences on federal civil rights convictions.

They each tried to shift the blame onto Chauvin – who had already pleaded guilty to a civil rights charge – during the trial, citing his 19 years of experience on the police force.

Lane claimed that Chauvin ‘deflected’ his suggestion to help Floyd, while Keung testified that Chauvin ‘was my senior officer and I trusted his advice,’ and Thao said: ‘I would trust a 19-year veteran to figure it out.’

No federal sentencing dates have been set, but defense attorneys said in state court last week that they expect them to be in September.

Cahill´s order said he won´t entertain any potential plea agreements from Thao or Kueng until 15 days after their federal sentencings. They rejected plea deals from prosecutors earlier.