Even if you knew in advance about the “blue shift” that would occur in states like Pennsylvania — and we did know in advance about it! — it’s been hard to make enough of a mental adjustment for it this week. Numbers flashing across a TV ticker have a certain magnetic power and certitude to them. It was easy to forget that Joe Biden would gain ground once mail votes were added to the tallies because such votes were overwhelmingly Democratic this year in Pennsylvania and most other states.

But just because of that blue shift — and the red shift that occurred in states where mail votes were counted first — that doesn’t mean the presidential race was all that close in the end. Joe Biden’s win was on the tighter side of the likely range of outcomes suggested by polls, but it was a thoroughly convincing one judged on its own merits.

So put aside your anxieties of the past few days and the premature media narratives that have been circulating since Tuesday night. Suppose, instead, that you’d been on one of those weekslong rafting trips in the Grand Canyon (sounds pleasant, doesn’t it?) and woke up to this map:

It’s not a landslide, by any means, but this is a map that almost any Democrat would have been thrilled about if you’d shown it to them a year ago. Biden looks to have reclaimed the three “blue wall” states — Pennsylvania, Michigan and Wisconsin (ABC News has announced that Biden is the “apparent winner” in Pennsylvania and Wisconsin) — that were central to Hillary Clinton’s loss. He may also win Arizona (he would become the first Democrat to do so since 1996) and, in the opposite corner of the country, Georgia (the first Democratic winner there since 1992). Additionally, Biden easily won Nebraska’s 2nd Congressional District, which could be a thorn in the side of Republicans going forward. He also ran far ahead of Clinton in rural northern states such as Maine, Minnesota and New Hampshire.

Extrapolating out from current vote totals, I project Biden winning the popular vote by 4.3 percentage points and getting 81.8 million votes to President Trump’s 74.9 million, with a turnout of around 160 million. This is significant because no candidate has ever received 70 million votes in an election — former President Barack Obama came the closest in 2008, with 69.5 million votes — let alone 80 million. That may also be a slightly conservative projection, given the blue shift we’ve seen so far and the fact that late-counted votes such as provisional ballots often lean Democratic. I’d probably bet on Biden’s popular vote margin winding up at closer to 5 points than to 4, and 6 points isn’t entirely out of the question either.

The margin is also a bit more impressive in the context of our highly polarized political era, which has tended to produce close elections. If I’m right about the popular vote margin, Biden’s win would come via the second-largest popular vote margin since 2000, exceeding Obama’s 3.9-point margin against Mitt Romney in 2012 but lagging behind Obama’s 7.3-point win over John McCain in 2008.

What about the polls? Didn’t they show a wider margin for Biden? Yes, they did — Biden led in the final national polls by around 8 points. So we’re probably going to wind up with a polling error of around 3 to 4 points, both nationally and at the state level. (Although that will reflect a combination of states like Georgia, where the polls were spot-on, and others like Wisconsin, where there were big misses.) This is, of course, a subject on which we’ll have more to say in the coming days. For now, it’s safe to say that pollsters will have some questions to answer, especially about how they missed in the same direction (underestimating Trump) in some of the same states two elections in a row.

At the same time, this election’s polling error may wind up being fairly normal by historical standards. Indeed, the final polls miss by around 3 points, on average, in presidential elections. The error this year may be somewhat wider than that, but we should wait for all the votes to be counted because margins may shift substantially in some states before results are certified.

In any case, Biden’s ability to survive a polling error of the size that sank Clinton was precisely the reason he was a fairly heavy favorite in our forecast. Biden won (or is likely to win) several states — Georgia, Wisconsin, Pennsylvania, Arizona — by margins that will probably be between 0 and 2 percentage points, in contrast to Clinton, who lost Wisconsin, Michigan, Pennsylvania and Florida by margins of 1 percentage point or less. Biden’s 89 percent chance of winning the Electoral College included the possibility of nail-biter wins in critical states — although, again, it’s hard to know if this race would be regarded as that much of a nail-biter if not for the timing of ballot counting and the blue shift.

The bigger problems — both for Democrats and for the polls — were in races for Congress.

What Trump revealed about America | FiveThirtyEight

There weren’t necessarily any huge upsets in the Senate; it’s just that Democrats lost most of the toss-up races. Among races where winners have been projected so far, Democrat Sara Gideon is the only Senate candidate favored in our forecast to have lost, and she had only a 59 percent chance of beating Sen. Susan Collins, according to our final forecast. Gideon, however, is likely to eventually be joined by Cal Cunningham in North Carolina, who had a 68 percent chance, although the polling in that Senate race had tightened in the closing days of the campaign following a Cunningham sexting scandal. Republican Joni Ernst held off challenger Theresa Greenfield in Iowa, although Ernst was a narrow favorite in our forecast.

Democrats do retain a chance at a Senate majority, or more likely a 50-50 split in which Vice President-elect Kamala Harris would be the deciding vote. Democrats currently hold 48 seats, but there are two runoffs in Georgia on Jan. 5 that are sure to attract hundreds of millions of dollars worth of advertising. I’m a little too exhausted to prognosticate about the Georgia runoffs all that much, but Democrats are at least mathematically alive here in a state that Biden appears likely to win. They also retain some outside chances at winning a Senate seat in Alaska, where mail votes have not yet been counted.

But Democrats underperformed in the U.S. House, where they’ve lost almost every toss-up race that has been projected so far and Republicans have made a net gain of five seats and counting. It also appears as though Democrats will underperform in the House popular vote relative to the presidential vote and the generic ballot, where Democrats led by about 7 percentage points. That looks like a significant polling miss (although the House popular vote can take a long time to finalize). In that sense, the election could be described as more of a repudiation of Trump specifically than of Republicans writ large.

Biden did have some shortcomings, however. One major one was his apparent underperformance among key groups of Hispanic voters, especially Cuban Americans in South Florida and Mexican Americans in South Texas. As you can see in this chart from The New York Times, there were huge shifts toward Trump in these areas: 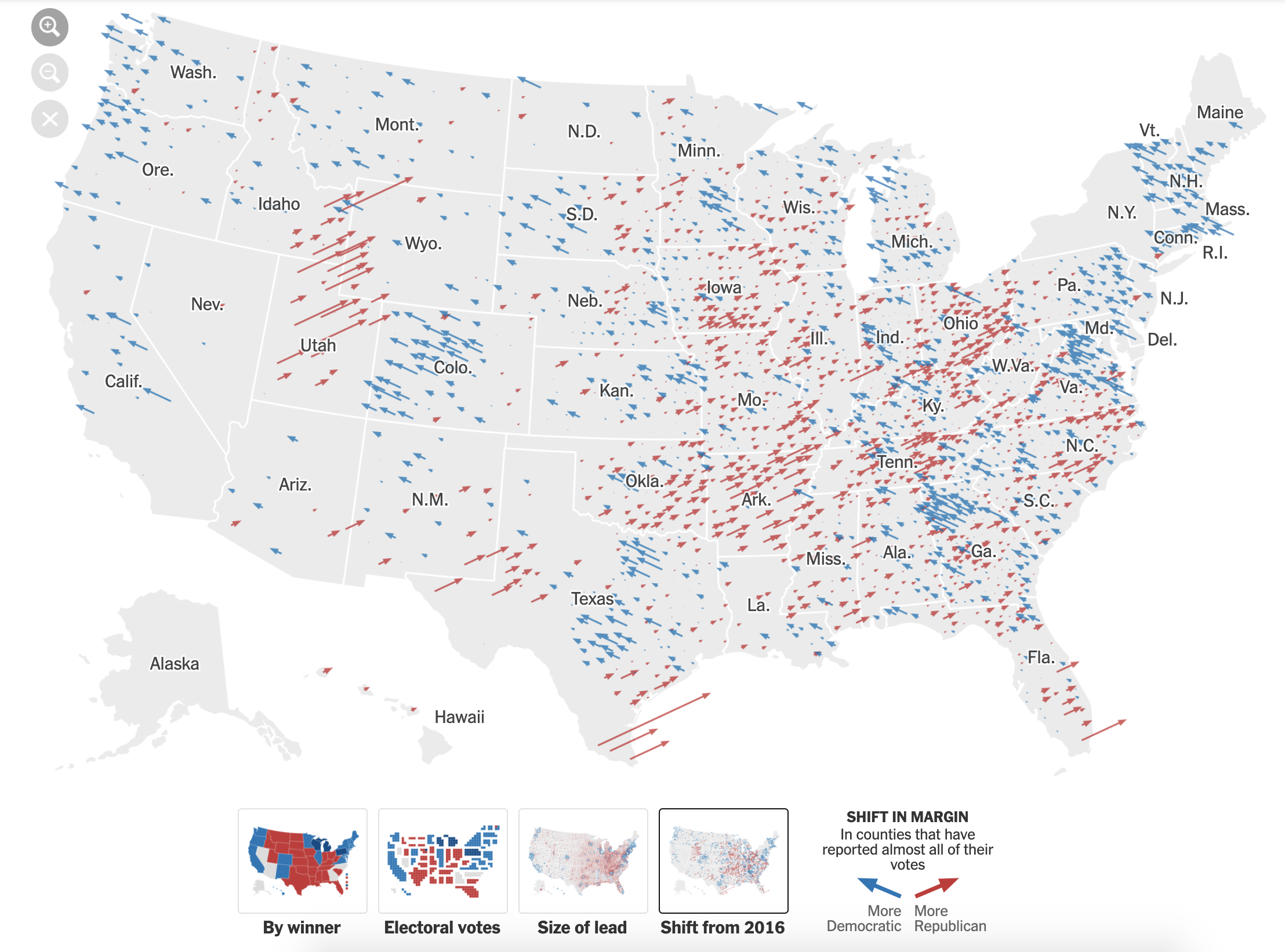 Indeed, even with the addition of Georgia and Arizona in their column, Democrats’ Electoral College coalition is somewhat fragile if it doesn’t contain Florida or Texas. It’s not clear yet what the tipping-point state will be in this election — but mostly likely it will be Arizona or Wisconsin, where it appears as though Biden will win by around 1 percentage point. That could mean there’s around a 4-point gap between the roughly 5-point popular vote victory that we eventually expect from Biden and his margin in the tipping-point state, a bigger Electoral College disadvantage than Clinton had in 2016 (3 points).

Still, this brings up one last point: This is the seventh election out of the past eight in which Democrats have won the popular vote for president. If American elections were contested on the basis of the popular vote, this race could probably have been called fairly early on Tuesday night, and we could all have gotten a lot more sleep the past few days. But don’t let bleary eyes obscure Biden’s accomplishment.