Georgia teachers rank 35th in the nation for base pay at about $39,000 a year, according to a National Education Association study published in April. Abrams’ plan would land Georgia in the top 10.

Kemp’s team thinks she needs to go back to the classroom for some math lessons.

“Following the lead of her pals in the Biden administration, Stacey Abrams’ latest Hail Mary proposal for over $2 billion in new state spending annually joins an ever-growing pile of pie-in-the-sky plans that would make inflation worse and require higher taxes on Georgia families to pay for it all,” Kemp spokesman Tate Mitchell said.

Abrams spokeswoman Jaylen Black offered a peek at how the campaign thinks the numbers would work:

Based on projections, the state’s tax collections would grow about 3.5% a year, or at least $1.1 billion. That’s enough to cover both the annual cost of the raise plus the estimated price tag of $264 million required for another Abrams goal: expanding Medicaid under the Affordable Care Act.

GAE President Lisa Morgan said the raises are needed, but she also slammed policies advanced this year by Kemp and the Republican-controlled Legislature that put teachers on the front lines in the culture wars concerning the teaching of race and other issues.

“Adjusted for inflation, our educators are making less now than they did in 1999,” Morgan said outside the group’s headquarters, adding: “It’s not just about salaries. It’s about educators being treated as the professionals they are.”

Tests get tougher for Herschel Walker with revelation of children

During the GOP primary, Herschel Walker’s rivals assailed his strategy to limit public appearances and avoid debating them.

They said he was untested.

There had already been reports about Walker’s history of mental illness and threats of violence against women. He also had claimed he graduated from college when he had not, and he exaggerated his business record and made bizarre statements promoting a purported coronavirus cure.

The tests grew harder this week.

First, he faced scrutiny for claiming publicly on numerous occasions that he had worked in law enforcement. He had not.

The Daily Beast then stepped up the degree of difficulty when it reported that Walker has a 10-year-old son that he supports financially but does not see. The child’s mother sued Walker in 2013, a year after giving birth, to obtain a declaration of paternity and child support, according to court records.

A day later, Walker confirmed that he had two other children whom he had apparently never mentioned in public before.

“I have four children. Three sons and a daughter. They’re not ‘undisclosed’ — they’re my kids,” Walker said in a statement released by his campaign. “I support them all and love them all. I’ve never denied my children.”

The first, a daughter, was born when he was a star running back at the University of Georgia. Walker also said he has a 13-year-old son.

Until this week, the only child he had spoken about publicly — including frequent mentions during the campaign at public appearances and in interviews — was his 22-year-old son Christian, who was born during Walker’s first marriage to Cindy Grossman.

He said he “just chose not to use (the other children) as props to win a political campaign,” Walker’s statement said. “What parent would want their child involved in garbage, gutter politics like this?”

It is unclear what role Walker has played in the children’s lives.

Walker said he acknowledged the four children on a form he provided to the federal government when he was appointed to the President’s Council on Sports, Fitness and Nutrition by President Donald Trump in 2018. The form is not publicly accessible but was provided to the AJC.

Walker has criticized other fathers, particularly in the Black community, who have abandoned their children.

“I tell people this, I say, ‘I want all African Americans out there to know, even though you may leave the mom, don’t leave the child,’ ” Walker said in an interview last month with Atlanta rapper Killer Mike.

Parenting can be difficult at times.

Walker’s opponent, Democratic U.S. Sen. Raphael Warnock, has also had child support and custody issues. In a legal filing earlier this year, his ex-wife, Ouluye Ndoye, asked for more child support because Warnock’s income has increased. She also wants additional custody of their two children so she can spend time outside the state to complete a program at Harvard University. Warnock and Ndoye co-parent the children.

A semi-automatic rifle is displayed on a wall of guns during the National Rifle Association annual meeting in May in Houston. (Patrick T. Fallon/AFP/Getty Images/TNS) 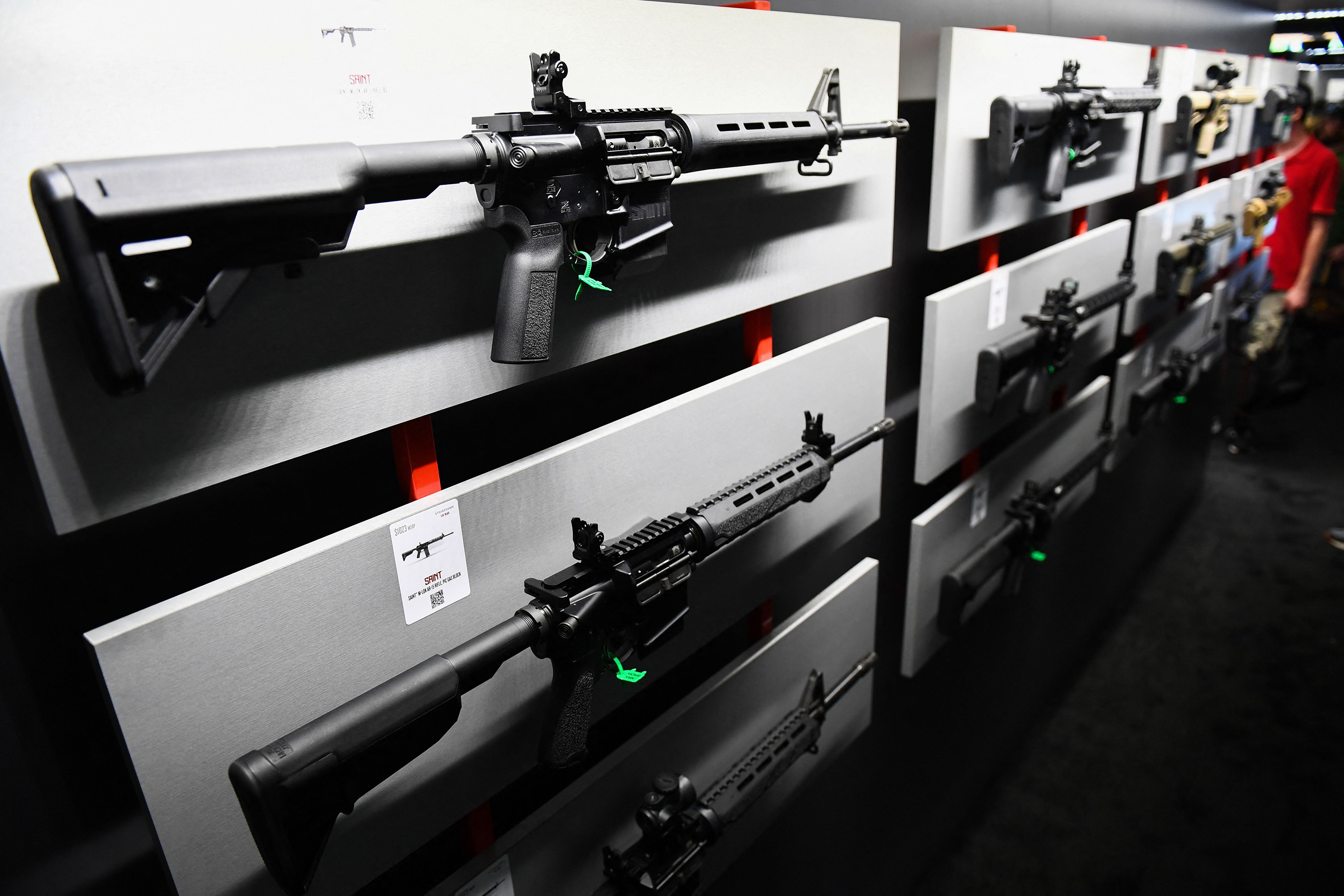 A semi-automatic rifle is displayed on a wall of guns during the National Rifle Association annual meeting in May in Houston. (Patrick T. Fallon/AFP/Getty Images/TNS)

A group of 10 Republican and 10 Democratic U.S. senators reached an agreement on gun safety measures.

Georgia’s top two Democratic candidates. however, have not embraced the proposal with equal zeal.

The deal — made in the aftermath of a massacre at a Uvalde, Texas, school and a rash of other mass shootings — would:

The agreement, however, does not provide for broader background checks, set new limits on which weapons can be sold, establish a mandatory federal red flag rule or raise the minimum age limit to purchase certain rifles.

U.S. Sen. Raphael Warnock, up for reelection in November, was happy enough with the compromise to endorse it, saying in a tweet that “inaction isn’t an option” after the high-profile shootings.

Stacey Abrams, the Democratic nominee for governor, said the package falls short, especially in a state where it just became legal to carry a concealed weapon without a license.

“While it is important that we see some progress in gun legislation, it is insufficient for the challenges we face here in Georgia,” Abrams said before vowing to beef up the state’s gun regulation.

Republican congressional candidates in Tuesday’s runoffs are having a difficult time trying to separate themselves from their opponents on the Senate gun deal.

They all hate it.

Mike Collins, running in the 10th Congressional District, took his case to a gun store in Bogart.

“The Second Amendment is absolute,” Collins said. “And here we are, standing in a gun shop, and we’ve got the U.S. Senate debating how much of those rights they’re going to take.”

His opponent, Vernon Jones, staked out a similar stance, saying he “will never compromise on the Second Amendment – period.”

In the newly drawn 6th Congressional District, no longer safe electoral territory for a gun control advocate like U.S. Rep. Lucy McBath, Jake Evans and Rich McCormick tried hard to outdo each other in proving their commitment to gun rights.

U.S. Senate candidate Herschel Walker came the closest of any Republican in backing the gun deal. He approved of the bipartisan effort and was glad to see that the framework included strengthening mental health programs and school safety.

“But at this point, it’s just that — a framework,” Walker said. “With these D.C. politicians you always have to check the fine print. So I’ll be looking closely at the specifics of the entire legislation once it’s made public.” 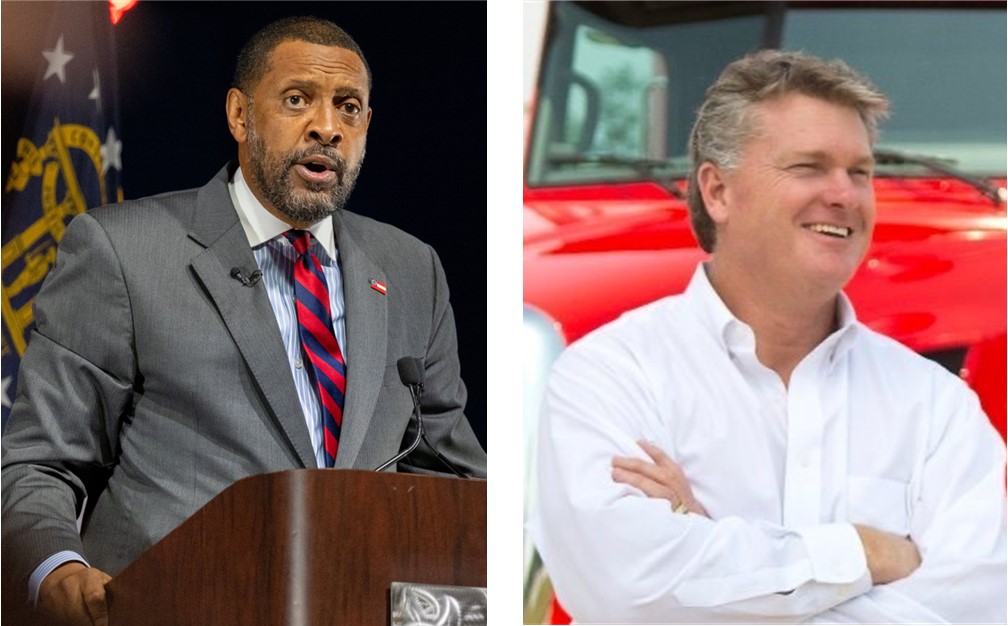 Things get nasty in the 10th District

Mailboxes in the 18 counties of east-central Georgia were recently filled with mailers from the campaign of Mike Collins attacking his opponent in Tuesday’s Republican runoff: Vernon Jones.

Jones, once a Democratic state representative and the former CEO of liberal DeKalb County, now stylizes himself as the “Black Donald Trump.”

“We don’t have to worry about a corrupt career politician who is actually a Democrat from DeKalb County,” Collins, whose father once represented the region in Congress, said at a recent stop. “You can vote for someone who has lived here all his life, a conservative who is also an outsider.”

That kind of rhetoric is almost expected.

But Collins also started handing out red rape whistles bearing Jones’ name, a reference to his past misconduct toward women.

Jones responded by filing a police report in Morgan County claiming Collins is encouraging “violence against me.” Authorities say they will not investigate.

As the top vote-getter in the May 24 primary, Collins may be the favorite to win Tuesday, although Jones bears an endorsement from former President Donald Trump.

Former President Donald Trump has endorsed candidates in two of Georgia’s Republican congressional runoffs on Tuesday, but his influence doesn’t seem to match what it used to be. (AP Photo/Michael Wyke, File)

Former President Donald Trump has endorsed candidates in two of Georgia’s Republican congressional runoffs on Tuesday, but his influence doesn’t seem to match what it used to be. (AP Photo/Michael Wyke, File)

He’s endorsed candidates in two of the Republican congressional runoffs: Jakes Evans in the 6th District and Vernon Jones in the 10th District.

But those endorsements don’t appear to matter as much as they once did.

At best, May’s GOP primary was a mixed bag for the former president. His chosen candidates in the races for governor, secretary of state, attorney general and even insurance commissioner all suffered significant losses. Trump’s favored hopefuls did win in the U.S. Senate race and the contest for lieutenant governor.

“At this point in time, the Trump endorsement is neutral. It’s not a plus and it’s not a negative,” said Gordon Rhoden, the Athens-Clarke County GOP chair. “People are moving beyond that.”

Silence might be the best way to measure Trump’s current standing.

Rhoden described a recent county event where GOP U.S. Senate nominee Herschel Walker was the featured speaker as the “biggest crowd we ever had — and even Herschel didn’t mention Trump.”

Here’s a sample of other stories about Georgia government and politics that can be found at www.ajc.com/politics/: