Oprah Daily’s series Good People Doing Great Things highlights everyday heroes who see a need and are stepping up to help. Want to celebrate a local leader who’s making an impact? Email us at OprahDailyStoryIdeas@hearst.com and we may feature them in an upcoming column.

Long before Katie Orenstein founded the OpEd Project, a social venture (part social business and part nonprofit) dedicated to uplifting and amplifying historically marginalized voices in the media, she harbored a sensitivity to the silences imposed on certain groups of people. “I grew up constantly thinking about who we were listening to and who we weren’t listening to because of the dynamics I saw around me in my family, my community, and my school,” says Orenstein, who’s also the author of Little Red Riding Hood Uncloaked: Sex, Morality and the Evolution of a Fairy Tale,

As an undergraduate at Harvard in the late ’80s and early ’90s, Orenstein decided to study folklore to learn how story is created and by whom—a critical inquiry, because, as she often says, “the story we tell becomes the world we live in.” While studying, she came across folklorist Zora Neale Hurston’s book Tell My Horse about her time collecting stories and revising history in Haiti and Jamaica and thought, That’s what I want to do with my life.

She became a voracious reader of Hurston’s work and eventually applied for a grant, where she flew to Jamaica and Haiti to start her new life and similarly immerse herself in the culture to gather meaningful stories. When she arrived in Haiti, a coup broke out. “So I started writing about what was happening in the streets,” she says, which involved a gruesome litany of horrors: “Rape, torture, murder, arson, massacres, assassinations.”

In 1992, Orenstein had a formative experience that magnified the importance of who tells the story. While reporting out a story on the 100,000 Haitians who marched across the Brooklyn Bridge on Oct. 11 of that year, she noticed, while they were protesting the coup in Haiti, some took aim at the The New York Times, accusing the newspaper of “being the voice of the State Department.” She wondered if they could be right. Even in the pre-internet era, she says, she was easily able to track down the key sources the Times used to build its story—”international and American diplomats, elites, and very few majority-class Haitians,” she remembers, emphasizing how flagrantly these sources biased the Times‘ reportage. “You can imagine how all that threads up for me,” she says. 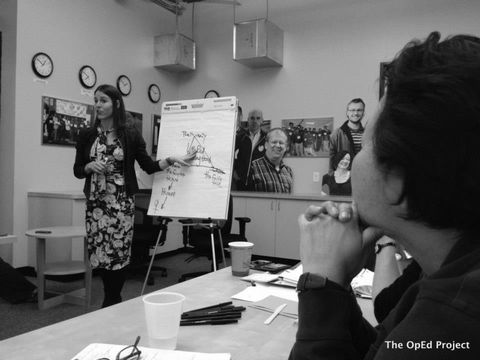 By 2005, Orenstein, now living back in the States, became absorbed in several conversations about women’s lack of representation in various fields that dominated the media at the time, planting the seed that would soon form the basis of the OpEd Project. First, former president of Harvard University Lawrence H. Summers gave a speech in which he wondered whether a lack of biological aptitude might explain the dearth of women in the sciences and engineering; then columnist and political pundit Susan Estrich accused the Los Angeles Times of sexism due to the fact that so few women’s bylines ran on the OpEd pages.

To attach real data to Estrich’s charge, Orenstein conducted her own inquiry with pragmatic zeal and aptitude for research and found, more broadly, that women comprised only 15 percent of the expert voices on our country’s most influential platforms between 2007 and 2008. Part of the problem, she found, was men submitting far more unsolicited opinion pieces than women – up to 90% more. “The single greatest predictor of who gets published is who pitches,” she says she soon realized.

What if we stopped wringing our hands and debating and just jumped in and tried to do something? Orenstein thought. As someone whose words often showed up in the nation’s leading opinion pages—The New York Times and The Washington Post, among others—she knew the basic steps as well as the huge potential for impact in publishing think pieces and decided she’d start conducting workshops throughout New York City. “‘Let me show you the components of a pitch and how to write an OpEd,'” she says. It occurred to her that someone ought to start an organization dedicated to the cause—she traveled circles large and small to find a willing founder. When the Times ran a piece about her in 2007, she started to wonder if perhaps she should take the reins: “I thought, Since no one else is doing it and someone should do it, gosh, maybe it should be me. Why not me and why not now?”

By 2008, she’d established the OpEd Project with the goal of expanding and magnifying a diverse array of voices, especially women’s voices—and succeeded beyond expectation. By 2012, that 15 percent climbed to 21 percent—a 40 percent increase. Using a database called Media Cloud, an open-source platform for media analysis, in partnership with M.I.T., calculated that the representation of women’s voice on our country’s most authoritative platforms moved up to 26 percent by 2015—a staggering 73 percent increase.

While many forces contributed to this shift—the proliferation of social media and publishing platforms, the #MeToo and Black Lives Matter movements have all driven a richer range of voices into the media landscape—the OpEd Project’s impact is undeniable. Today, 20,000 people (overwhelmingly women from a vast and diverse range of backgrounds and expertise) have directly benefited from the org’s workshops as well as its mentorship and fellowship programs—and hundreds of millions have benefited indirectly from the spread of their ideas.

In keeping with its core values, The OpEd Project’s resources are open to people of all identities and regardless of means. A virtual two-day “Write to Change the World” workshop, taught by seasoned journalists, costs $450 with full or partial scholarships for up to 30 percent of each workshop’s participants. The class includes a month of access to journalist mentors which will be extended free of charge for an additional two months to participants who utilize its service. Every Thursday at 5:00 p.m. EST, the OpEd Project hosts “Ask a Journalist Office Hours,” where an editor reviews work submitted by members to break down its strengths and limitations from which the group can learn. In addition, the OpEd Project also runs a portfolio of fellowships that bring together diverse thinkers, across industries and disciplines, with critical expertise that can help solve big challenges—like the climate crisis, public health problems, racial injustice and the advancement of women’s rights.

According to research conducted by the University of Colorado, scholars’ visibility in mainstream media increased by 240 percent after doing the organization’s Public Voices Fellowship within two years compared to two years prior.

Carol Anderson, PhD, a historian at Emory University, is a prime example. The well-established academic, who chairs the African American studies department, placed an OpEd in The Washington Post while in the fellowship program titled “Ferguson Isn’t About Black Rage Against Cops. It’s About White Rage Against Progress.” It went viral and eventually became the basis for her New York Times bestselling and National Book Award-winning book, White Rage: The Unspoken Truth of Our Racial Divide. “It was read aloud on the Senate floor. She’s become one of the most important public thinkers and historians about race in our generation,” Orenstein says, pointing out that it’s not just hard data the OpEd project collects to demonstrate its efficacy, but public impact, too.

Another thinker who impactfully passed through the organization is Zareena Grewal, whose op-ed in the Times, “When War Comes Close to Home,” described a drone strike in Iraq that killed members of her own family. The oped forced several countries and the U.S. Pentagon, to acknowledge civilian casualties. Human rights workers and journalists investigated and five years later, the first survivor was granted reparations in August of 2020.

Sylvia Foti, a workshop attendee in the mentorship program, wrote an op-ed in Salon about discovering her grandfather, Jonas Noreika, formerly thought of as a war hero, was actually a Nazi collaborator responsible for the deaths of thousands of Jewish people. Her research resulted in front-page coverage in the Times and a book, The Nazi’s Granddaughter, all of which caused a huge stir in Lithuania, galvanizing local historians and citizens to demand a plaque celebrating his life and heroism be removed.

While these exceptional women demonstrate the power of words to reshape the world, a key measure of the Project’s efficacy, Orenstein says her organization also gauges success based on participants’ personal transformations, sharing a quote from a student in a recent workshop: “What you offer is professional development at its highest form: the term ‘professional development’ fails to do justice…I so rarely feel nurtured and strengthened in the way you and your team made me feel last week. I feel recharged from being around you. I learned deeply from you. I seldom encounter people like you. You are extraordinary in your uplifting of others.”

While she recognizes the systemic impediments that prevent many of us from believing in our own capabilities and thwarting our efforts to advance a cause or idea, she says, “I want us to be clear-sighted and not close our eyes to that, but neither let it be an excuse for inaction. A key moment for me was when I crossed the street from thinking someone else should do something about this issue to thinking I should,” she explains.

Musing on the OpEd Project’s driving purpose today, she says, “In this moment in time, when I think about what’s best for us and what’s going on around us, we want to be a counterforce to regressive narratives, unethical information, fake news, and false and exclusionary hierarchies of knowledge. We see ourselves as a standard bearer for a more ethical and inclusive conversation in history.”

You can sign up for an OpEd project workshop here. And if you’re an experienced journalist, the Project accepts applications to volunteer in their mentorship program, but you can also click here to donate to the cause.