The website FiveThirtyEight has released its 2022 midterm forecast and highlights four races to watch in the Keystone State.

In the chase for the U.S. Senate seat of retiring Republican Pat Toomey, FiveThirtyEight’s model calls it a toss-up between Democrat John Fetterman and Republican Mehmet Oz. Fetterman, the current lieutenant governor, wins 51 times in the sample of 100 outcomes, while Oz, the celebrity doctor, wins 49 times.

In the gubernatorial race, Democratic Josh Shapiro is favored over Republican Doug Mastriano. In a sample of 100 outcomes, Shapiro, the Pennsylvania attorney general wins 73 times while Mastriano, a state senator from Franklin County, wins 27 times. 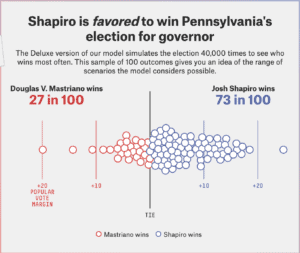 In the 8th District, Democratic incumbent Matt Cartwright and Republican challenger Jim Bognet are considered a toss-up. Cartwright wins the sample of 100 outcomes, 51-49. 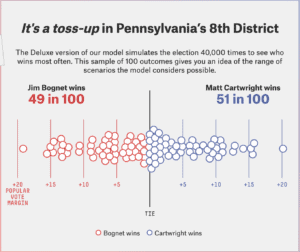 In the 17th District, Democrat Chris Deluzio is slightly favored over Republican Jeremy Shaffer by a 63-37 count in the sample of 100 outcomes. 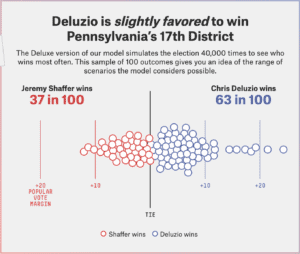 Overall, FiveThirtyEight says that GOP is favored to win the U.S House, while the Senate is a toss-up. Given the headwinds facing the incumbent party in traditional midterms and the challenges with inflation and the economy, this is a bit of a surprise.

According to editor-in-chief Nate Silver‘s forecast, candidate quality matters in the Senate as well as for governor. And the model currently shows that there’s a 73 percent chance that the majority of the U.S. population will reside in states run by Democratic governors.