— The FDA has “a reasonable expectation” Congress will reauthorize its user fee programs, but thousands of employees could soon receive furlough notices.

TIME IS RUNNING OUT for Congress to put patients first!

Before it expires at the end of the month, Congress must act to ensure the final FDA User Fee bill includes critical protections for patients like ensuring clinical trial diversity & reforming the accelerated approval pathway. Learn more about why doctors and patients are advocating for these key provisions to be included in the final reauthorization bill. This chance only happens once every five years!

UPDATED COVID BOOSTER ROLLOUT BEGINS — Covid-19 vaccines reformulated to include the BA.4 and BA.5 Omicron subvariants got the regulatory green-light last week and are expected to become increasingly more available throughout this week. White House officials marked the occasion Tuesday by taking their most bullish stance yet on the updated shots: Absent a “wild card” variant, they mark the beginning of an annual vaccination cadence for average Americans akin to the flu, President Joe Biden said late Tuesday.

“This week, we begin a new phase in our COVID-19 response. We are launching a new vaccine — our first in almost two years — with a new approach. For most Americans, that means one COVID-19 shot, once a year, each fall,” the White House statement said.

Earlier Tuesday at a White House press briefing, Biden’s chief medical adviser Anthony Fauci had hinted at the policy change: “If we continue to have an evolution of what we used to call, and still do call, an influenza adrift — not a major change, but just sort of drifting along the BA.5 sublineage, I believe that that would fit in well with what we’re talking about: The likelihood is that we’ll get into a cadence that, on a yearly basis for most people, we’ll be able to cover what is out there as the dominant variant,” Fauci said.

Wait, really? It’s long been the Biden administration’s goal to shift toward an annual Covid vaccine recommendation instead of an ad hoc booster based on a storm of waning immunity and rising caseloads.

Officials are optimistic that data submitted by mRNA vaccine makers Pfizer and Moderna suggesting broader immune responses with those shots — as in, more reliable immunity against an array of variants, not just those included in the vaccine cocktail — will offer longer-lasting protection, even if the virus continues to mutate as part of the Omicron family tree. White House Covid-19 Response Coordinator Ashish Jha is also betting heavily on the updated shots offering better protection against mild infection and transmission.

But some health experts warn that the administration is overpromising something it has no firm human data to back up. Meanwhile, federal funds for Covid vaccine acquisition and distribution are set to run out as soon as January.

Whether the new boosters represent a turning point for the U.S. on the pandemic’s trajectory or just a pivot on how the government manages the disease remains to be seen — Lauren will soon have more for Pros on that point.

“If we get another surge, Congress likely at that point will step up,” Jha said at the Tuesday briefing. “It will cost the American taxpayer twice as much, and it will be less effective.”

More than 600 million tests have been distributed throughout the effort, according to a senior administration official who was not authorized to speak publicly about the campaign. If Congress provides more funding, the government will “expeditiously resume distribution,” but the Biden administration is reserving the remaining at-home tests for later this year, the official added.

“The money we are very scarce on is money to ship them,” a separate senior administration official told Prescription Pulse. They were granted anonymity because he was not authorized to speak publicly on the matter. 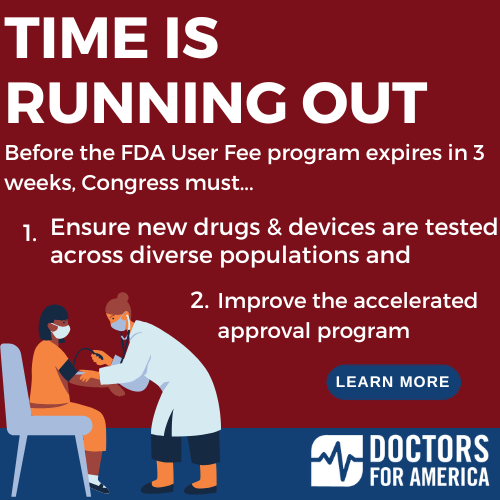 DO YOU REMEMBER — Welcome to September; the FDA’s user fee programs are set to lapse at the end of the month if Congress does not take action.

FDA Commissioner Robert Califf previously said the Prescription Drug User Fee program has carryover funds for approximately five weeks into the next fiscal year — meaning that the agency will have to begin notifying PDUFA-funded staff of “impending employment actions” this month if it does not have “assurance” that fees can be collected beyond the end of September.

“We cannot comment on our conversations with Congress, but at this time, we have a reasonable expectation that the positions supported by user fees will be funded,” FDA spokesperson Chanapa Tantibanchachai said. “We will continue to evaluate the situation.”

FDA ADVISORY COMMITTEE TO CONSIDER ALS DRUG CANDIDATE … AGAIN — The FDA’s advisory committee for neurological drugs convenes today to discuss an amyotrophic lateral sclerosis drug candidate from Amylyx for the second time this year. The FDA’s ultimate decision on the drug will be closely watched after the agency granted accelerated approval to Biogen’s Alzheimer’s drug Aduhelm last year, sparking a wave of outrage from adcomm panelists and other public health experts.

In March, the committee voted that the results from a single Phase II study of the ALS drug weren’t enough to indicate that the drug could meaningfully treat the condition. Now, the expert panel is back to discuss new analysis of some of the data from the Phase II study, including a post hoc analysis done on trial participants’ function, using them as their own controls. It also contains new data from a Phase II study of the same drug for patients with Alzheimer’s disease, looking at the drug’s improvement on other biomarkers consistent with neurodegenerative disease.

The FDA doesn’t appear particularly swayed by those additional considerations, but the draft voting question for panelists does emphasize the serious unmet need of people with ALS.

BRIAN KING: ‘WE’RE WORKING AS QUICKLY AS POSSIBLE’ — Much to his critics’ dismay, the new chief tobacco regulator won’t say whether the FDA will remove unauthorized electronic cigarettes from store shelves in the near term, even though the agency finalized a rule in 2016 making vape products without marketing orders illegal, Katherine reports.

“I’m committing to explore all viable pathways that are legally and scientifically defensible,” Brian King, the director of the FDA’s Center for Tobacco Products, insisted several times in an interview with POLITICO since assuming the position. “Nothing is off the table.”

The agency has yet to decide the fate of big market players, some of which are owned by or have ties to major tobacco companies, and it’s more than a month behind on reviewing applications for non-tobacco nicotine vapes.

JUUL AGREES TO TENTATIVE SETTLEMENT — Juul Labs has reached an agreement with 34 states and territories to pay $438.5 million to settle an investigation into how the electronic cigarette maker marketed vaping products to underage people.

Under the tentative deal, the company agreed to stop marketing to youth, selling flavors not approved by the FDA, using paid influencers and distributing free samples, among other measures.

“Illumina intends to appeal the Prohibition Decision to the EU General Court. Illumina also intends to appeal any EC Divestment Decision (if and when adopted by the European Commission) and, if necessary, to seek interim relief suspending the divestment of GRAIL until the final determination of these appeals,” the company said in an SEC disclosure Tuesday evening.

The decision from across the Atlantic comes days after Illumina won a positive ruling from an FTC judge on Thursday, who found the acquisition would not negatively impact the nascent cancer diagnostics market, POLITICO’s Josh Sisco and David report.

On Friday, the FTC announced it will appeal that loss, an expected move that will bring the case before the FTC’s commissioners. The commissioners almost universally overrule the agency’s in-house court when it rules against the agency. If FTC staff win on appeal, then Illumina and Grail can appeal to a federal appeals court of their choice, Sisco reports.

Time is running out to drastically improve the lives of patients. This opportunity only presents itself every 5 years: the FDA User Fee Reauthorization opens an avenue for Congress to ensure that new treatments are actually proven to be safe and effective for everyone who needs them.

In case you missed it, we (and other leading health advocacy groups) sent a letter asking you to include the life-saving provisions in versions of the FDA User Fee Reauthorization bills.

Specifically, we hope you will include the following in the final User Fee package:

● enforceable measures to ensure diverse representation in clinical trials and

● oversight of the accelerated approval drugs to ensure that their clinical benefit is proven in a timely manner.

Learn more about why doctors and patients are advocating for key provisions to be included in the final reauthorization bill.

A report by the HHS Office of Inspector General found Medicare payments for intermittent urinary catheters were 3.4 times the amount suppliers spent to acquire them in fiscal 2020.

The SEC charged life sciences investment adviser Perceptive Advisors for failing to timely disclose its personnel-owned sponsors of special purpose acquisition companies that clients were advised to invest in. The firm agreed to pay a $1.5 million penalty and accept a cease-and-desist order and a censure to settle the charges.