New feature: Check out news exactly for YOU ➡️ find “Recommended for you” block and enjoy!

The Agbogbomefia of the Asogli State, Togbe Afede XIV, has reportedly rejected gifts Assin Central Kennedy Agyapong sent him as part of the ongoing yam festival.

The renowned Chief is expected to cap this year’s yam festival celebration, which started on August 6, with other traditional leaders and the people of the Asogli State on Sunday, September 11.

Besides upholding tradition, the one-month-long yam festival seeks to foster and promote unity, reconciliation, stocktaking, and development in the Asogli State.

The occasion provides the chiefs and people in the Asogli State the annual opportunity to reunite with their ancestors and reaffirm their allegiance to the Agbogbome Stool.

Graphic Online reports that Kennedy Agyapong graced a sitting on Friday during a sitting at the Asogli State Palace Forecourt in Ho with gifts.

The gifts were rejected at the durbar ground on the ground that the MP uses unkind words on Togbe Afede.

In videos, some voices at the durbar ground could be heard booing away the outspoken legislator.

Watch the clips below:

Still on the MP, YEN.com.gh reported that Kennedy Ohene Agyapong expressed sadness over the government’s decision to seek economic aid from the International Monetary Fund (IMF). 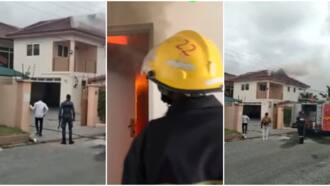 Speaking on the move, the outspoken MP said he was heartbroken when he learned the government would commence talks with the Fund.

”I’m very sad today when I saw the publication that we are going to the IMF; that is what [former president] Mahama was praying for, he has gotten his wish,” he said in a video.

New feature: Check out news exactly for YOU ➡️ find “Recommended for you” block and enjoy!