We can surmise with a high degree of certainty three things about Rep. Devin Nunes’ re-election bid.
One, internal polling has given Nunes reason to worry that Democratic challenger Andrew Janz is breathing down his neck.
Two, it’s been so long since Nunes had a credible opponent, he’s literally forgotten how to campaign.

Three, either he’s genuinely afraid to go out into large crowds or his ego has conned him into believing that he can win without personally connecting to large numbers of voters.
How close is this race in a district drawn up to ensure a Republican victory?
Close enough for Nunes to stop running against The Fresno Bee, the mainstream media and #FakeNews, and identify his opponent by name in television and radio attack ads.

The problem for Nunes is, the centerpiece of his new commercial — thanks to the stellar reporting of The Bee’s Rory Appleton —  has been debunked.
And even worse for Nunes, he committed a cardinal sin by needlessly drawing Fresno County District Attorney Lisa Smittcamp into a backyard brawl she had been determined to stay out of.

“I haven’t campaigned on county time. It’s been either on my vacation time or my lunch break. I am glad Lisa Smittcamp is calling out Devin for his lies.” — Andrew Janz

In case you missed it, the Nunes ad said that “Janz claims to be a hard-working prosecutor, but he’s posted hundreds of campaign tweets during taxpayer-funded work hours.”
Appleton asked Smittcamp if that were true.
“We have had no issues with him and are not aware of him campaigning on county time at all,” Smittcamp said Wednesday.
Smittcamp, who occupies a nonpartisan office but is a Republican, also told Appleton that the commercial “is curious to me, because the Nunes campaign has done public records requests for his time sheets, and those have been provided.”

Smittcamp: ‘This Is Not My Fight’

For the record, Smittcamp has not endorsed in the race, but her husband’s family is prominent in Republican circles, big contributors to the GOP and conservative causes, and longtime supporters of Nunes.
“I don’t have a dog in this race,” Smittcamp told me Thursday. “This is not my fight.” 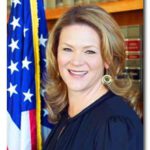 Smittcamp also reiterated her Wednesday comments: “I gave Andrew very strict instructions on campaigning, and I have no reason to believe he has violated any of the rules that were set forth.”
Said Janz on Thursday: “I haven’t campaigned on county time. It’s been either on my vacation time or my lunch break. I am glad Lisa Smittcamp is calling out Devin for his lies.”
Clearly, when it comes to campaigning, Nunes is fat and flabby — totally out of shape.
Did he think that Smittcamp would bail him out with a nod-and-a-wink?
Then he doesn’t know the DA.
If I were Janz, I’d send Nunes a note thanking him for further energizing Democratic voters.

Nunes Embraces Role as a Victim

At this point, you also have to question how well Nunes knows the voters of California’s 22nd District.
While Janz has done more than 130 meet-and-greets and held four town halls over the past 18 months, Nunes has flown all over the country doing fundraisers for fellow Republicans and answering softball questions from Fox News hosts. He’s also continued his one-man investigation on behalf of President Trump to take down the “deep state.”
And while Nunes’ rants about Antifa, liberals, and the resistance probably satisfy longtime supporters with deep pockets, I imagine that small business owners and farmers are a lot more worried about Trump’s tariffs and ag’s labor shortage.
They also might wonder why Nunes — who supposedly is one of the most powerful members in Congress — leaves all the heavy lifting on water, immigration reform and opposing Trump’s bewildering trade policies to fellow Valley Republicans Jeff Denham and David Valadao, and even Democrat Jim Costa.
And there’s this: If Nunes is so powerful, why does he fully embrace — even appear to relish — the role of victim?

A man of strength would meet voters anywhere, anyplace, anytime.
A man of strength would separate himself from Trump’s nativist “Build the Wall” policies.
A man of strength might even sit down with Trump and move him to a reasonable immigration position by telling him the story of the 1957 volcanic eruption on Faial that displaced thousands of Azoreans.
That tragic event inspired U.S. Rep. Harlen Hagen of Hanford to sponsor legislation granting visas to 1,300 families. Congress twice extended Hagen’s Azorean Refugee Act of 1958, further growing the Valley’s Portuguese community.

It’s Been 16 Years Since Nunes Had a Real Campaign

The last time Nunes faced legitimate competition was the 2002 CA-21 Republican primary. That was when Mike Briggs attracted enough votes in Fresno and Tulare counties to derail Jim Patterson’s congressional dreams and pave the way for Nunes’ victory.

If I were Janz, I’d send Nunes a note thanking him for further energizing Democratic voters.

Since then, he has defeated Democrats David LaPere, Fred Davis, Steven Haze, Larry Johnson, Otto Lee, Suzanna Aguilera-Marrero, and Louie Campos. All were sacrificial lambs. All were underfunded. Lee was a carpetbagger from San Jose and virtually unknown in the Valley. One time, no one even bothered to run against Nunes.
Janz, however, is a real adversary whose campaign, at last count, had raised $6 million.
Maybe Nunes can beat him with mail brochures, phony attack ads and playing the poor, poor, pitiful me card.
Whatever he decides, he can ill afford another whiff like this one.