Gay Pride is the perfect antidote to shame. Both a celebration of rights earned and a protest for those yet to be achieved, Pride festivals are joyous events which bring the LGBTQ+ community together through times of adversity.

Europe does pride exceptionally well – a biased voice might even say they are the best in the world! Madrid, London, and Berlin Prides have cemented their positions internationally, however outside of the capital cities of Europe there are also legions of pride events whose reputations have grown to rival that of their respective capitals.

Just a couple of decades ago, these events were true protests for human rights. But as LGBTQ+ acceptance becomes more commonplace in Western Europe the events have translated into celebrations complete with musical and dance festivals, parades with floats full of partygoers decked out in drag or simply colorful underwear as well as street parties where locals gather to celebrate diversity and acceptance of the community. 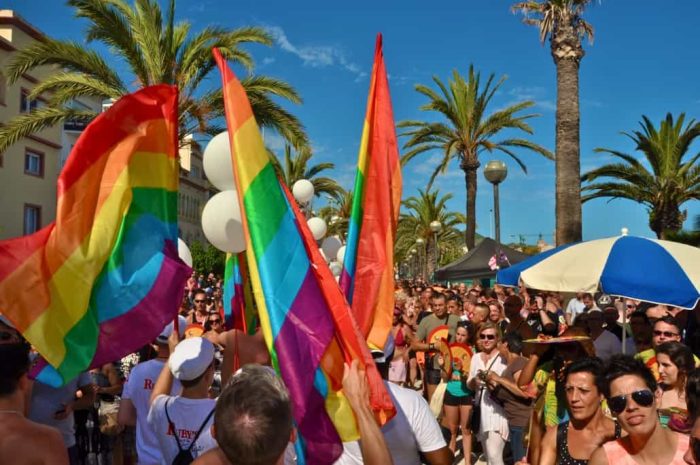 Sitges is a deceptively quaint looking town on the coast of Spain, just south of Barcelona. Deceptive because it is a town which seems to be forever looking for an excuse to party. The locals are a diverse mixture of Catalans and expats – especially those from the LGBTQ+ community. As such, each June, Sitges does Pride celebrations with the gusto of cities many times its size.

Sitges Pride includes everything from drag shows, pool parties and a parade, which gives Madrid a run for its money in terms of flamboyance and eleganza! Stages on the seafront blast live music from tribute artists to all the camp classics – and divas – with over 80 different acts playing over the five days of pride.

By night, the main plaza becomes abuzz with activity at its many gay bars, opening their doors to let the pride flow out into the streets and right up to the seafront. Be sure to pack your pride fans because this party is hot!

Manchester is as gay as it gets. In fact, one could say it is queer as folk – as one of its many gay claims to fames is the iconic British version of the series was filmed there. The city has always been a fighting force for LGBTQ+ rights in the UK as far back as 1964, when the Northwest Homosexual Law Committee was formed there and was instrumental in decriminalising same-sex activity between consenting men.

Manchester Pride runs in August smack in the middle of the pride season. This particular event has a long history that goes back as far as 1989.

There is of course a huge parade through the city center, but it is counterbalanced by a poignant candlelit vigil to provide a moment of reflection on those lost during the HIV crisis. For a whole week the main street transforms into a “gay village” with stages and wild street parties, including the iconic Canal Street and its line of bars and clubs.

Once again within the grand isle of Britain, we find ourselves at Brighton Pride. Often referred to as “London by the sea”, Brighton is one of the most liberal and LGBTQ+ friendly cities in Europe – not to mention it’s a quintessential British seaside town with a pier! Brighton Pride is held early August and has just passed its 30th anniversary. The event is arguably the most popular Pride for the UK due to the sheer variety it offers.

The main parade marches down through the city and into Preston Park, where a pay-to-enter festival ramps up the volume with dance tents and stages. The entrance fee is entirely justified because the biggest LGBTQ+ icons and superstars grace those stages. These icons range from Kylie Minogue to Boy George to Years and Years.

This festival is not essential however as literally every bar throughout the city holds their own events. Come sunset, Brighton city centre explodes into street parties. The biggest street party is the ‘Gay Village Party’ which is easily followed up by an all-night rave at one of the many clubs lining the seafront – should you be so inclined. 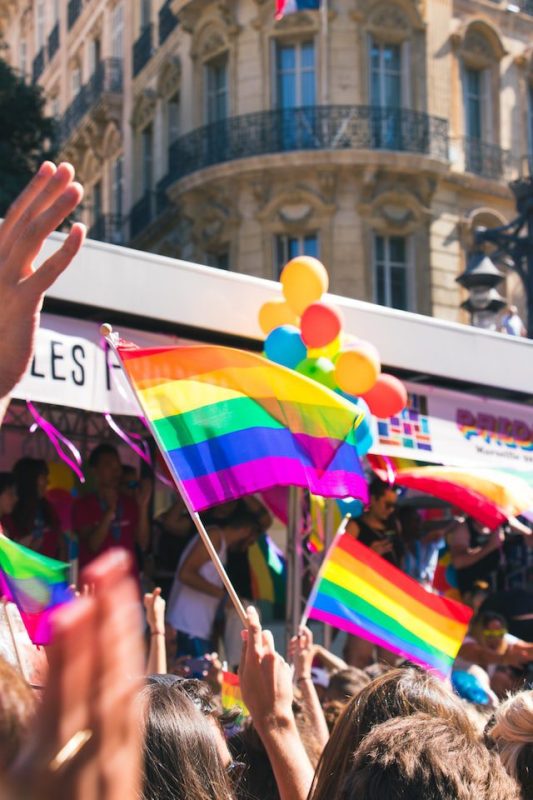 Jumping the channel to France, Marseille holds the crown for being “the most beautiful pride in France” happening early July every year. Indeed, the seaside city of Marseille is a stunning location for a pride celebration with twisting cobblestone roads to march along, passing through vast squares full of historical architecture.

Marseille is the oldest city in France, so perhaps it should come as no surprise its Pride event has a real focus on cultural events running alongside the parade and parties. Galleries open LGBTQ+ focused exhibitions throughout the city. Visitors can attend a wealth of conferences on the important issues of the day affecting our community.

Marseille Pride has been running for almost thirty years now. The event was birthed as a protest during the HIV crisis of the 90’s. It hosted Euro Pride in 2013 and continues to run strong with a dedication to celebrating diversity and making it clear it doubles as a protest as much as a party by listing exact demands for LGBTQ+ rights on their website.

Italy’s second biggest city is the “fashion capital of the world” and thus – unsurprisingly – also the gay capital of Italy. In order to live up to this reputation, Milan Pride has made itself epic – literally, it is 17 days long! You can only imagine the number of parties, parades, events, and culture that one can fit into that amount of time.

Taking place in late June, most of Milan Pride is centered around – well, the city centre – but other exciting festivities pop up all around the city, the most notable being the “Pride Square” party in Porta Venezia – the gay district – holding unique cultural events like live debates and book readings amongst the street parties. Italians know how you party, so remember to pace yourself.

Late June to early July, Germany’s fourth most populous city hosts Gay Pride Cologne. Cologne has a thriving gay scene – if somewhat more provincial than Berlin´s – and is considered the gay capital of Western Germany. It has a reputation for being Germany’s most laid-back city, full of warm easy-going people – an estimated whooping 10% of the city identify as LGBTQ+ – forming the perfect atmosphere for a Pride celebration.

The event has taken place since the 1980’s and began as a protest called Christopher Street Day – named for the street of the Stonewall riots.

In Cologne Pride a lot of the action transpires around the charmingly distinctive old town – with pop up stages, shops and, naturally, beer stalls – why let a good stereotype about Germans and beer go to waste.

After the parade, the CSD street festival is the big event with music icons as big as Lady GaGa, internationally renowned drag queens and rousing LGBTQ+ speakers performing on the main stage. Why not take the time to go up on the Deutzer Brucke (Deutz bridge) for an amazing panoramic view over Cologne’s old town and take in the flourishing rainbow community celebrating below.