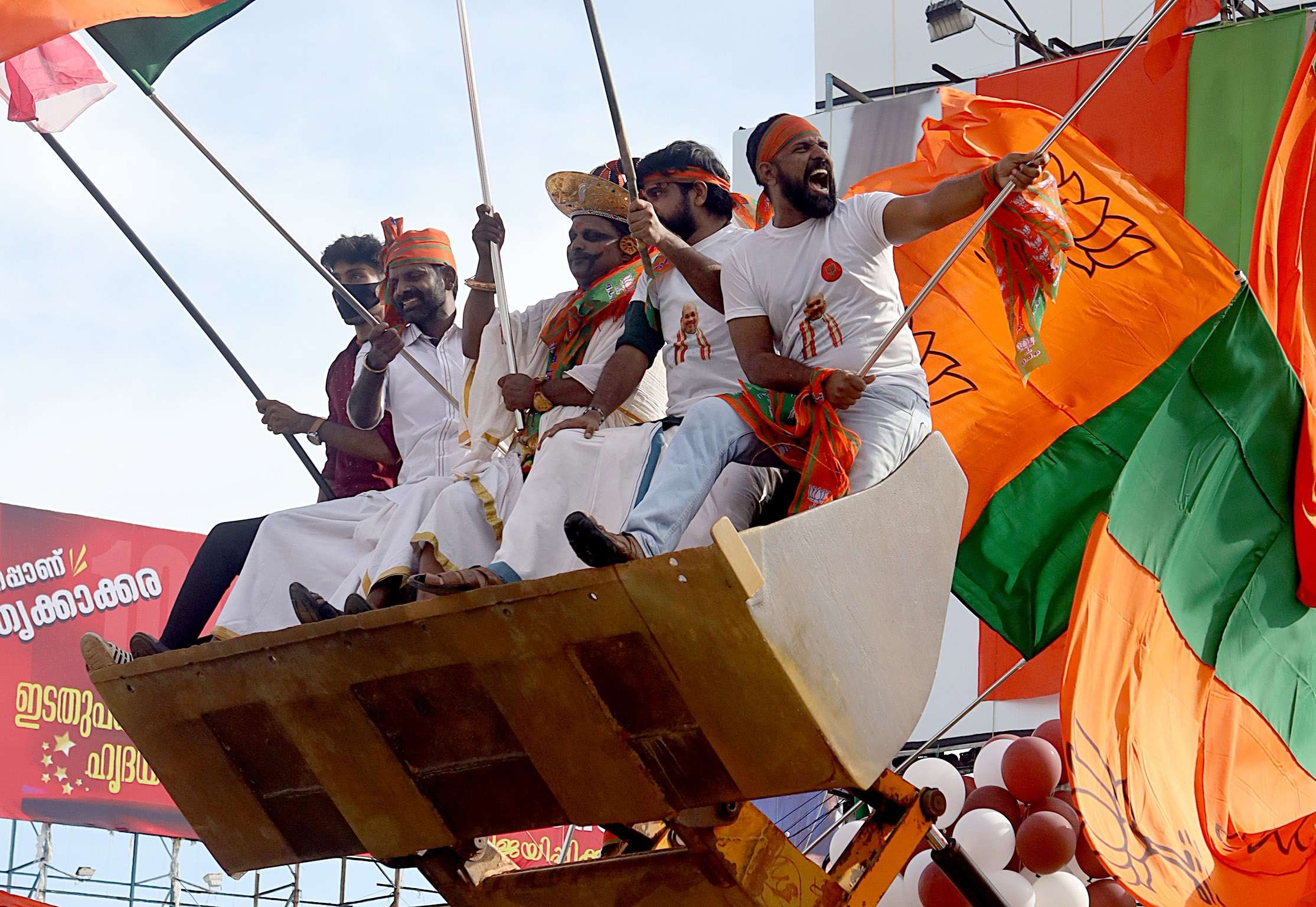 “Is our party getting stronger or losing ground [in Kerala]”– this question was recently raised in the comment box of a BJP leader by the party’s own cadre. In fact, the question is not confined to cyberspace. Instead, it’s a question that reverberates from top to bottom of the BJP state unit and to an extent lingers in the general political psyche of Kerala. BJP leaders, however, approach this basic question from varied angles and their answers often fail to find common ground.

A section of leaders in the party feels that party state president K Surendran has failed to deliver. But those close to Surendran point to the unprecedented scenario in which he took over as the president in March 2020. The state went into lockdown hardly a fortnight after he took over. Politics during the pandemic was an absolute challenge, which even the Congress-led main opposition failed to cope up with, they argue. The critics point out the removal of BJP former spokesperson Sandeep Varier from the post as another glaring example of the corruption that has taken deep root in the party.

It is learnt that Varier was stripped of his position following the findings of a party commission that probed complaints by four BJP district units against him. The district leaderships had complained that Varrier was collecting huge money from their districts on behalf of the party. Though many more leaders are also accused of using the party as a means for minting money, action against Varier became inevitable since district committees submitted proofs to the commission, it is learnt.

The new Prabhari of Kerala BJP, Prakash Javadekar, during a freewheeling chat, refused to comment on the reasons that led to the ouster of Varier. He stressed the bleak prospects of Congress and chose to speak in cryptic terms about BJP’s prospects in the LS election, saying that Keralites are not fools to vote for Congress in the next Parliament election. On whether BJP has any long-term political blueprint and strategy in Kerala, the new Prabhari said the BJP indeed has a plan but the strategy was not to reveal it to the press.

BJP state president Surendran was more candid. “The issue that BJP faces in Kerala is not a unique one. The challenges are similar for BJP or any other party in states where it’s a distant third force,” he said, adding that the challenge to surge ahead and replace the parties holding the first and second position was more arduous than meets the eye. “But we are certainly moving ahead in terms of vote share and public acceptance. Our vote share has increased by one-third in the local body elections. We lost several seats in the assembly and Lok Sabha elections by a whisker,” he said.

According to him, it is the strategic voting by a section of Muslim minority that ruined the prospects of BJP in both several Parliament and assembly seats last time. “Strategic voting to defeat a candidate or party is not a constructive democratic practice, it can’t survive for too long. Things will certainly change for good and signs in this direction are getting more visible,” he said, adding that the Christian minority has been slowly, but steadily gravitating towards BJP. This, he said, was more visible after the ban on Popular Front of India.

Surendran who also refused to divulge the details of the reasons that forced the party to remove Varier from the post, however, said it was a message to all those who break party discipline and speak and work against the party policy. “Social media politics doesn’t deserve much attention,” he said, hinting at the clamour in social media over the ouster of Varier. He said the party would put up a more focused political resistance against both LDF and UDF in the coming days. The party, according to him, was forging ahead.

But many BJP leaders beg to differ. The party, they say, is dominated by Union minister V Muraleedharan and K Surendran. The leadership doesn’t have any long-term plan or strategy to win elections in Kerala. The party that rules the Centre, but not being able to win even a single assembly or Parliament seat is nothing but a failure, they say. “Why should we make tall claims? It is a plain truth that BJP is not going to rule Kerala any time soon. If the party must make tangible political inroads, it will have to indulge in political activities. There should be more focus on the constituencies where BJP has a chance. The high decibel campaigns and ridiculous claims won’t take BJP anywhere in elections in a state like Kerala,” said a senior BJP leader who is almost in political hibernation these days owing to the difference of opinion with the state leadership.

Not many who keenly observe politics and Christian churches would agree that BJP would ever be able to win a sizable support base of Christians when it comes to electoral politics. What has been plaguing the saffron party’s political prospects in Kerala is the core strength BJP cherishes elsewhere in the country to win votes en masse, they point out. It cannot win elections in Kerala by whipping up communal sentiments. That’s the major challenge it faces in Kerala, they argue.

“Hate politics that BJP practises elsewhere brings it votes. Even if a vast majority of Christian laity appears to be ardent supporters of Modi on various issues, that’s not enough for BJP to win their votes. When it comes to the issue of safeguarding their faith, they find CPM or Congress more trustworthy,” argues senior journalist and political analyst Roy Mathew. The lessons the church learns from elsewhere in the country make it difficult for them to align themselves with the cause of BJP. Winning a sizable share of Christian votes is likely to remain a pipe dream of BJP, he added.

Views expressed above are the author’s own.