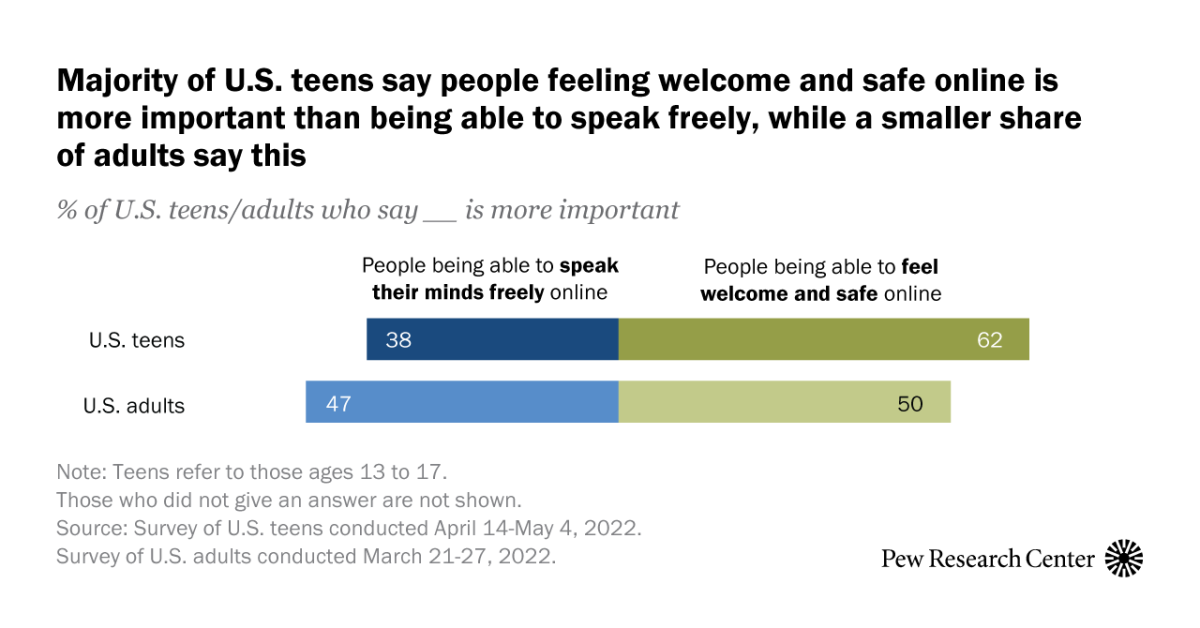 Teens and adults in the United States differ on a key issue tied to online speech and its consequences. A majority of teens ages 13 to 17 say a welcoming, safe online environment is more important than people being able to speak their minds freely online, according to a new Pew Research Center survey. A separate survey of Americans 18 and older shows that adults’ views on the same question are more evenly divided.

Adults ages 18 to 29 differ from their younger teen counterparts on this question. Some 57% of adults in this age group favor the idea that people should be able to speak their minds freely online. Those 65 and older, by contrast, are the only age group whose views are similar to teens’: 58% of these Americans say feeling welcome and safe online is more important.

Pew Research Center conducted these studies to understand teens’ and adults’ views about online speech and the broader online environment. This analysis relies on data from two separate surveys. For the analysis of teens, the Center conducted an online survey of 1,316 U.S. teens from April 14-May 4, 2022, via Ipsos. Ipsos recruited the teens via their parents who were a part of its KnowledgePanel, a probability-based web panel recruited primarily through national, random sampling of residential addresses. The teen results are weighted to be representative of U.S. teens ages 13 to 17 who live with parents by age, gender, race, ethnicity, household income and other categories. The research was reviewed and approved by an external institutional review board, Advarra, which is an independent committee of experts that specializes in helping to protect the rights of research participants.

For the separate analysis of adults, the Center surveyed 3,581 U.S. adults from March 21-27, 2022. All adults who took part in the survey are members of the Center’s American Trends Panel (ATP), an online survey panel that is recruited through national, random sampling of residential addresses. This way nearly all U.S. adults have a chance of selection. The survey of adults is weighted to be representative of the U.S. adult population by gender, race, ethnicity, partisan affiliation, education and other categories. Read more about the ATP’s methodology.

But there is also nuance in people’s views of online speech. For example, when asked which of two statements about the way people react to offensive content online comes closer to their view, the majority of teens (59%) think that many people take such content too seriously, as do 54% of adults. Smaller shares in both groups believe offensive content online is too often excused as “not a big deal” (40% of teens and 44% of adults).

These new results are from two Center surveys – one of U.S. teens ages 13 to 17 conducted April 14-May 4, 2022, and one of U.S. adults conducted March 21-27, 2022. They come in the wake of heightened bipartisan calls for tech companies to address cyberbullying and create a safe environment for teens. They also come amid continued court battles over whether schools can impose consequences on adolescents for what they say online – and broader debates about people being banned by social media platforms or “canceled” by their peers.

Politics shapes views about online discourse among both teens and adults

In both surveys, Americans’ views on these topics break sharply along partisan lines. But regardless of what party they identify with or lean toward, teens are more likely than adults with similar partisan leanings to say allowing for safe spaces online is more important than being able to speak freely online.

Among adults, views on these topics within each political party have continued to evolve over the past several years. In 2017, when Pew Research Center first asked adults these questions, Democrats and Republicans held largely similar views about the balance of online safe spaces versus freedom of expression. That changed in 2020 and the partisan split on this question has widened from 16 to 26 points in the past two years. On the question about offensive content online, the partisan gap among adults has slightly narrowed since 2020 but remains pronounced. Adults’ overall views on this question have remained largely unchanged during this period.

The changes since 2020 are largely driven by those at the ideological poles in their respective parties. The share of conservative Republican adults who say free speech is more important in this context has risen from 57% in 2020 to 68% today, even as the view that offensive content is taken too seriously among that group has dipped somewhat from 74% to 67%. Liberal Democrats are now slightly more likely to think offensive content is taken too seriously than in 2020 (rising from 31% to 39%), but the majority of this group think it’s too often excused as not a big deal (61% say this today, compared with 68% in 2020).

Views of the online environment that teens and adults encounter also vary by race, ethnicity and gender.

For example, Black and Hispanic teens are more likely than their White peers to say that feeling welcome and safe online is more important than free speech online, and that offensive content is too often excused as not a big deal.

Among adults, those who are Black (60%) are more likely than either White (50%) or Hispanic (46%) adults to prioritize feeling welcome and safe. Black adults are also more likely than Hispanic adults to say offensive content is too often excused as not a big deal (51% vs. 38%). The views of White and Hispanic adults are statistically similar on both questions. (There were not enough Asian teens or adults in the samples to be broken out into a separate analysis. As always, their responses are incorporated into the general population figures throughout this analysis.)

Colleen McClain  is a research associate focusing on internet and technology research at Pew Research Center. 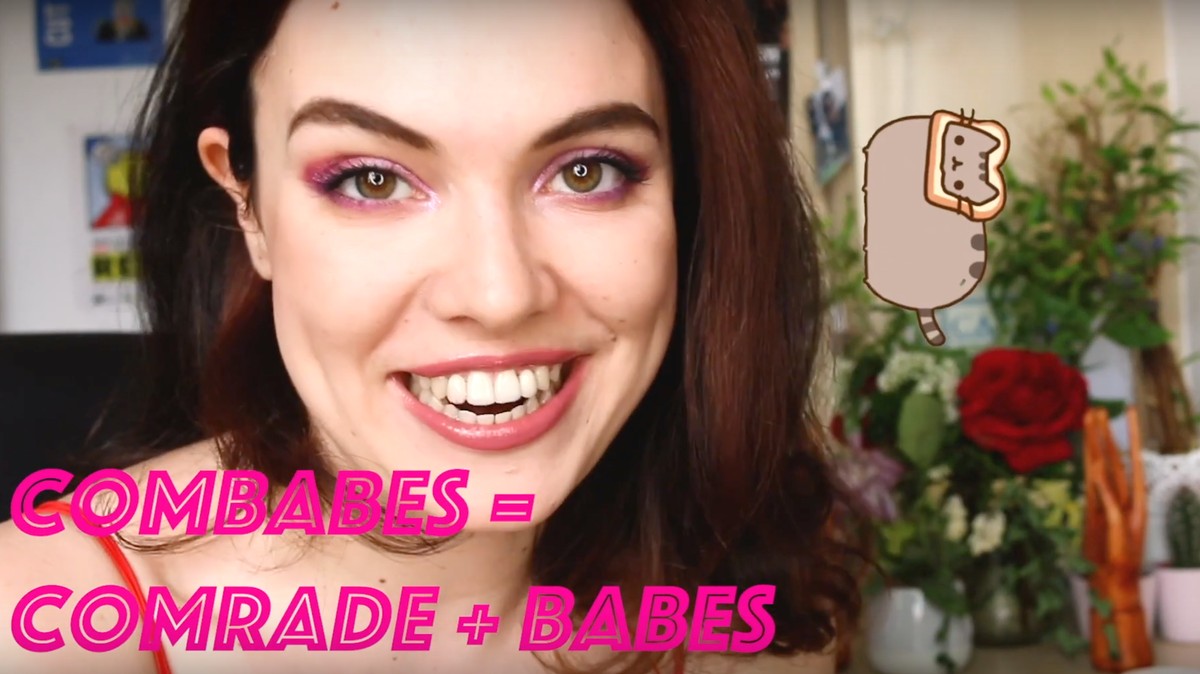 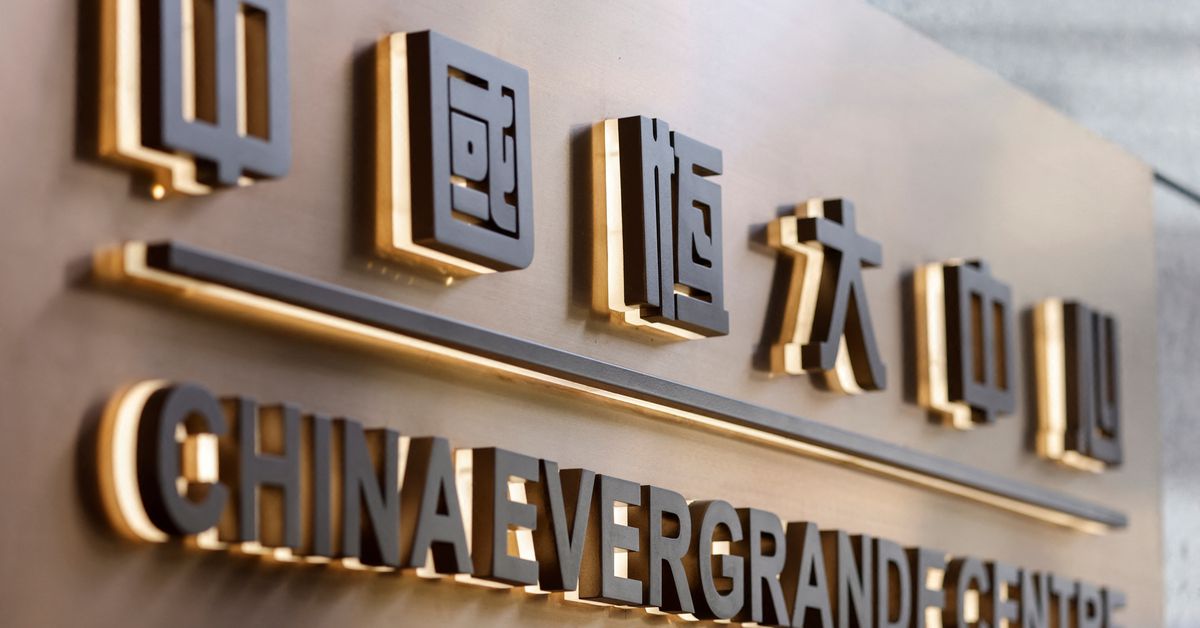