Since early May, every Friday evening, Julia Massey said, she gets the same notification from TikTok: She’s been banned from posting for a week.

Massey, 19, of California, a Jewish creator on the app, said that she could be posting a video of herself baking a loaf of challah or a clip of her cat but tat the outcome is always the same.

“It just repeats and repeats until I’m basically entirely incapable of interacting whatsoever on the app,” she said. Massey consistently uploads videos to her account, but she said it’s been a fight to get those videos to stay up.

Jewish creators say speaking about their Judaism on TikTok comes with a price. Comment sections on the content of Jewish TikTokers are often filled with antisemitic remarks, stereotypes and slurs. Some Jewish creators say they have to think about whether they want to disclose their Judaism, knowing the harassment they’re likely to be subjected to.

But recently, some Jewish creators said, they feel the app is subjecting them to a type of censorship by regularly flagging and removing their content. Nearly a half-dozen Jewish creators said their videos are being banned and removed for allegedly violating TikTok’s community guidelines for violations like hateful behavior, hamstringing their ability to use the app. Most of those creators said that when they appeal their bans or video removals, the app says the punishments were in error.

The types of videos that creators said the app flagged for violating its community guidelines include TikToks debunking antisemitic comments, a video discussing a news story about antisemitic violence, a video of a bat mitzvah held for a cat and a repost of a video made by TikTok in honor of the U.K.’s Holocaust Memorial Day.

“More recently, people have been much more outspoken and comfortable expressing their antisemitism and have basically entirely dismantled my ability of reaching anyone on the internet,” Massey said.

Jewish creators said they’re frustrated with the moderation process, which has them feeling targeted, although they aren’t exactly sure how or why it’s happening. Some, like Massey, said they believe they’re the targets of users on TikTok who mass report their accounts. However, mass reporting doesn’t lead to any automated action from TikTok. Others, like Josh Cohen, 19, of London, said they think they’re getting caught in a clumsy algorithm likely to have been designed to protect Jewish creators.

TikTok moderates content through a combination of technology and human moderators, attempting to identify, review and remove hateful content that violates its community guidelines.

“You’ll see people will censor words to try and get around it, because it seems to be a kind of automatic process, to the point I’ve seen people censor the word ‘Jew’ as ‘J-3-W,'” Cohen said.

TikTok strongly condemns antisemitism and said there is no place for antisemitism on or off the platform, a TikTok spokesperson said in a statement. TikTok also works with groups like the Anti-Defamation League, a Jewish civil rights organization, and the World Jewish Congress, an international federation of Jewish communities and organizations.

“We care deeply about fostering a welcoming environment and remove content that promotes hateful behavior, including antisemitic content,” the spokesperson said.

TikTok’s policy allows users to post counterspeech, but the Jewish creators said that when they post counterspeech videos responding to the comments, the videos are frequently removed for violating community guidelines. In some cases, the original offending comments remain up.

“Normally, the videos that I can almost always rely on getting taken down are when I reply to comments that I receive that will say terrible things such as ‘Why is it Jews always look like rats?'” Massey said.

Tommer, 32, and Yossi, 26, who run the account @JewCrazy and asked to be identified only by their first names to protect their safety, said they’ve been banned nine bans in two weeks from the end of May to the beginning of June.

The pair, who are brothers-in-law, have tried to take precautions against triggering a ban on their account, where they post comedic videos “with a Jewish twist.” They include staying away from posting political videos and restricting what words commenters are allowed to use. TikTok doesn’t ban discussion of the conflict between Palestinians and Israelis.

The first time they were banned, in mid-May, they were dumbfounded. Then it happened again.

“We got another ban, like, OK, what’s going on? And then another ban. We got four bans in a few days, and we hadn’t done anything,” Yossi said.

They said that they reached out to a TikTok community manager email and that eventually the ban was reversed and their account was restored. Within minutes of posting their next video, they were once again banned.

“We’re out here to make content that’s inclusive. … Don’t ban us for being Jewish,” Yossi said.

Michael, 28, who goes by @Oochdawg on the app and asked to be identified only by his first name to protect his safety, said that, like Tommer and Yossi, he avoids mentioning the conflict between Israelis and Palestinians or discussing politics.

Since the end of May, he said, he has been banned at least twice for allegedly violating community guidelines but was never told specifically what in his videos violated those guidelines.

The Anti-Defamation League has reported that antisemitism is rising in the U.S., and preliminary research found an increase in online and in-person incidents of antisemitism in the U.S. following the most recent fighting between Israel and Hamas. An analysis of Twitter from May 7 to May 14 showed more than 17,000 tweets that used variations of the phrase “Hitler was right,” the group’s Center on Extremism said.

Several Jewish TikTok creators said they, too, have received some version of the “Hitler was right” comment on their pages.

A transparency report TikTok published in February acknowledged that “hate speech remains a challenge to proactively detect” and said “we continue to make investments to improve.” The report said that TikTok removed nearly 73 percent of “hateful behavior videos before they were reported to us” and that nearly 84 percent were removed within 24 hours.

Cohen, who was featured in a TikTok U.K. video for Holocaust Memorial Day, said other Jewish creators feel comfortable coming to him when they are banned or a video is removed. He said that because he has collaborated with the platform, they hope he’s able to get them help or at least an explanation.

He said he gets a message from a Jewish creator experiencing a ban or a restriction on posting every two to three days.

Cohen himself has experienced quirks in the algorithm. When he tried to repost the video he appeared in for TikTok U.K.’s observation of Holocaust Memorial Day on his page, he said, the app removed the video for violating community guidelines.

While the moderation “is not maliciously aimed at Jews, they’ve done it carelessly so that it ends up silencing us while letting people who are blatantly antisemitic roam free,” Cohen said.

Daniel Kelley, associate director of the Center for Technology and Society at the Anti-Defamation League, said some social media platforms’ broad moderation tools to protect marginalized groups have backfired by taking down the content of those they’re intended to protect.

Although the Anti-Defamation League has no data about the degree to which antisemitism is breeding on TikTok, Kelley said TikTok isn’t a “bad-actor platform” and isn’t encouraging the behavior. But, he added, one person experiencing antisemitism on the platform is too many.

“All these platforms have massive resources that they could put toward better addressing these problems. If we can’t get to zero, we can definitely get to better than we’re doing right now,” Kelley said.

Michael said he wants TikTok to acknowledge the problem and work on finding a solution so Jewish creators can make their voices heard.

“Jews don’t feel safe on TikTok,” he said. “We feel it’s very toxic to us just for the same basic, fun TikToks we’re posting like everybody else.” 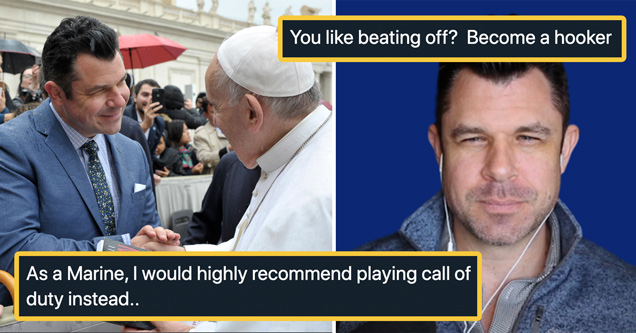