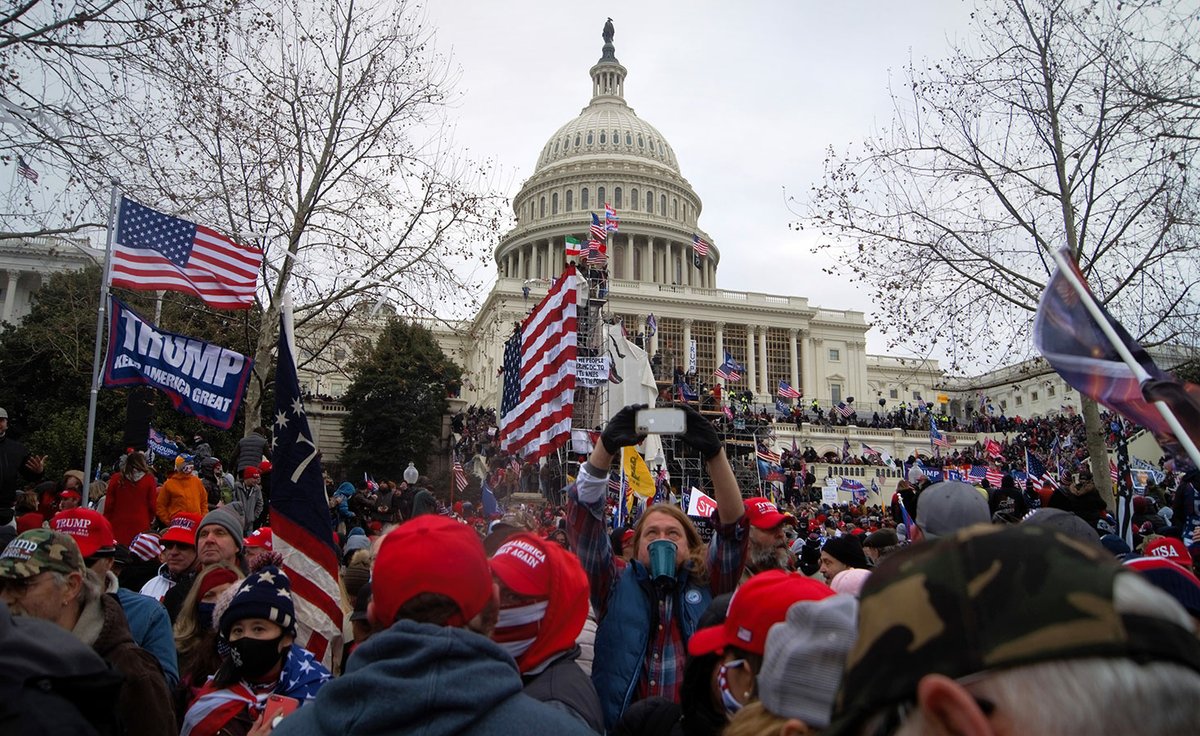 The greatest frustration for many Americans two years after watching the most violent attempt to overthrow our democracy in history on live television is how long it’s taking the criminal justice system to prosecute those who planned and carried it out.

But in the Proud Boys trial currently taking place in Washington, the Justice Department is finally laying out its case against former President Trump for creating the violent mob attack on Congress to prevent it from certifying President Biden’s election.

Trump’s false claims about Democratic vote fraud that inflamed Republican anger about losing the election began long before his defeat. Prosecutors say Trump laid groundwork for the Jan. 6 insurrection when he openly appealed for support from the violent rightwing Proud Boys in a televised debate with Biden in September 2020.

Stand Back, Stand By

Moderator Chris Wallace asked Trump whether he condemned the support of white supremacists and violent militias supporting him. “Who would you like me to condemn?” Trump asked. “The Proud Boys,” Biden said. Instead of condemning them, Trump publicly endorsed them. “Proud Boys, stand back and stand by,” Trump responded, suggesting they might be needed if Biden tried to steal the election.

Trump’s nationally televised promotion tripled Proud Boys membership and turned into a financial bonanza for them when they immediately began marketing “Stand Back and Stand By” T-shirts and other merchandise with their logo the night of the debate. They repaid him by responding to his call for a “wild” protest in Washington against congressional certification of the election results on Jan. 6.

Five Proud Boys leaders including former chairman Enrique Tarrio are now on trial for seditious conspiracy to overthrow the government by force and obstruct action by a joint session of Congress punishable by up to 20 years in prison. Oath Keepers founder Stewart Rhodes and his deputy are awaiting sentencing after a jury conviction on the same charges.

Since 2018, Tarrio and other Proud Boys have been employed by longtime Trump advisor Roger Stone to mobilize violent rightwing militias behind Trump and provide personal security for Stone. Stone has been a personal advisor to two of the most corrupt Republican presidents in history — Richard Nixon and Trump.

Stone was the one who created “Stop the Steal!” as a political battle cry for Trump to use to convince gullible Republicans not to accept Trump’s defeat when he lost the presidency. Here’s the most important thing to know about that. Trump originally planned to use that phrase in 2016 until he and his staff were as surprised as the pollsters and many other Americans when the totally unqualified Trump beat Hillary Clinton.

Trump’s presidential campaign had always been a money-making scheme to increase profits at his hotels and country clubs and peddle products with his name on them. When Trump stumbled into the presidency, his first political priorities were directing money from taxpayers, lobbyists and wealthy supporters into his private businesses while cutting his own taxes.

Trump loved being the center of national and world attention. He wasn’t going to give that up willingly just because he was voted out of office. That’s where the Proud Boys, Oath Keepers and other dangerous rightwing domestic terrorists came in.

“These men joined together and agreed to use any means necessary, including force, to stop Congress from certifying the election,” the lead prosecutor in the Proud Boys trial said. “And on January 6 they took aim at the heart of our democracy.”

There’s nothing like facing the possibility of decades in prison to get co-conspirators in overthrowing democracy to turn on each other. Defense attorneys for the Proud Boys agreed with the prosecution Trump had incited the violent insurrection. They resorted to a defense that hasn’t worked since the Nuremberg trials in Nazi Germany. The Proud Boys were just following orders from their president.

“President Trump told these people that the election was stolen,” Tarrio’s attorney Sabino Jauregui said. “He’s the one who unleashed that mob at the Capitol on Jan. 6.”

Jauregui said it would be an injustice to “scapegoat” the Proud Boys and other Trump followers while finding it “too hard to blame Trump . . .  too hard to put him on the witness stand with his army of lawyers.”

There are two obvious flaws in that legal defense. First, Trump has a lot of trouble these days attracting first-rate lawyers. Reputable attorneys refuse to risk their law licenses by making the absurd arguments in court Trump uses on Fox News to excuse his criminal behavior.

Secondly, there’s no reason not to convict Trump and his advisors who planned the violent insurrection as well as the Proud Boys, Oath Keepers and other foot soldiers who carried it out.

As Atty. Gen. Merrick Garland has often promised, no one is above the law in our democracy. Republicans as well as Democrats should support that fundamental legal principle.

Joel McNally is a national-award-winning newspaper columnist and a longtime political commentator on Milwaukee radio and television. Since 1997, Joel has written a column for the Shepherd Express where he also was editor for two years.